It is an ancient, destructive, ultra-powerful, defamatory, and malignant god-like entity that sought to destroy the world using a legion of evil spirits. Gozer was worshipped as a deity by the Hittites, Mesopotamians, and Sumerians around 6000 BC. Gozer is genderless (though it first appears as a female in the movie). It was worshipped by the powerful Cult of Gozer. Gozer has two trusted minions, themselves worshipped as demi-gods, that are harbingers and primary agents for its coming, being Vinz Clortho (The Keymaster) and Zuul (The Gatekeeper). Gozer is considered to be the archenemy of the Ghostbusters.

In Ghostbusters, it was portrayed by Slavitza Jovan and voiced by the late Paddi Edwards, who also played Flotsam and Jetsam in The Little Mermaid and Atropos in Hercules. In Ghostbusters: Afterlife, its corporeal form was played by Olivia Wilde, who also played Dr. Zoe McConnell in The Lazarus; its degraded form was played by Emma Portner; it was voiced by Shohreh Aghdashloo.

Gozer was an ancient Sumerian god from Babylonian times, as well as the god of certain cultures; the Hittites, Mesopotamians, and the Sumerians around 6,000 B.C., and it is known as "The Destructor" who would destroy worlds it visits - taking a new "Destructor" form for each dimension. Despite this, it was worshiped by many people - although its popularity died out over the centuries, the large sub-culture of fanatical Gozerians disbanded, and itself was banished from the mortal world by its hated immortal sister Tiamat and/or its worshippers. After a long protracted war, it and its own disciples lost, and by the modern age, very few active worshipers of Gozer remained.

By the time the Ghostbusters had started going into business, Gozer had already set its sights on Earth as her next world to be destroyed - sending its demonic minions (the Gatekeeper and the Keymaster) into the mortal world to possess two human beings so as to open a portal that would allow Gozer to enter the mortal world.

Ultimately, the two demigods succeeded in finding and possessing suitable human hosts and through their bodies opening the portal and Gozer emerged out of his own Temple on the roof of a skyscraper - the Ghostbusters were surprised when Gozer revealed itself as a humanoid female (for much of the film, the Ghostbusters were under the impression Gozer was a male, though Egon simply explained it as such "whatever it wants to be").

At any rate, Ray somewhat foolishly attempts to tell Gozer to return to their own dimension and angers them, causing the god to electrocute the entire team with energy - the Ghostbusters recover and try to fight back with their proton packs, but are unable to harm Gozer, who suddenly vanishes.

Gozer then reveals to the team it will reappear as the "Destructor" - taking form from whatever thoughts they may form in their heads, the team manages to clear their thoughts in an effort to defeat them, but Ray cannot help himself; he envisions the Stay Puft Marshmallow Man, and within moments, Gozer takes that form - a giant Stay Puft Marshmallow Man then starts to cause havoc in New York.

In the climactic battle, Stay Puft climbs the building, and the Ghostbusters fry him with their proton-packs but still cannot defeat the god - ultimately, they are forced to cross the streams, and the resulting explosion destroys the Temple of Gozer, blows up Stay Puft - causing Gozer to disperse in a shower of molten marshmallow.

Gozer appeared as a boss in the game 7 years after the events of the first movie. However, this time, the god was too weak and had no minions of his own. In order to reach full capacity, Gozer requires more power from the Gozer Worshippers' Mandala, and a sacrifice of a Shandor's blood.

That is why he needed Ilyssa Selwyn, the direct descendant of Ivo Shandor: the man who made Gozer's comings possible. However, Gozer's return to the mortal was not successful. The Ghostbusters team, along with their new recruit they named the Rookie, battled his Destructor Form while it tried to capture Ilyssa. While the original plan was to trap Gozer using the Super Slammer (a giant, car-mounted trap), the Rookie managed to do enough damage to the god's current weak form, destroying it.

With Gozer defeated, Ghostbusters believed that the Cult of Gozer is willing to bring him back the third time. However, Ivo Shandor became disappointed in his faith, and abandoned Gozer, intending to use the Mandala energy, releasing ghosts and Ilyssa as the sacrifice to undergo a Destructor Form himself. Gozer's remains, in the form of a glowing skull of his female form, can be seen being grasped by the mayor who is possessed by the evil spirit of Ivo Shandor, who later promptly tosses it over his back, indicating its worthlessness. This may mean that Gozer, after his second defeat, is completely destroyed or at least severely diminished.

A scene at the end of the credits has the Feig Ghostbusters listening to an audio recording calling out Zuul's name, implying that Gozer will rise again in the Feig universe.

Throughout the film, its likeness is carved into stone monuments and is mentioned numerous times. At the beginning of the film, Gozer killed Egon when he tried to trap the ghost. During the third act, it emerges from the pit inside the Shandor mine built as a temple by Ivo Shandor, who greets them upon their arrival. After asking to rule Earth together, Shandor is ripped in half by Gozer's bare hands. It reunites with Zuul and Vinz Clortho before being interrupted by Phoebe Spengler, Egon's granddaughter, who distracts it with tasteless jokes.

Gozer enquires if Phoebe is there to sacrifice herself, which Phoebe denies, distracting it long enough for a ghost trap to capture Zuul, severely weakening Gozer and turning it into a non-corporeal form. Gozer and Vinz Clortho pursue the Ghostbusters team to the Spengler Farm. The team attempts to trap it in the massive ghost trap surrounding the farm, but this fails, due to an electrical failure. Gozer destroys the ghost trap containing Zuul, who promptly possesses Lucky Domingo. Just as Gozer is about the kill the Spengler family with lightning, the original three surviving Ghostbusters arrive. Gozer mockingly asks Ray "are you a God?", who replies with "yes".

The trio blasts Gozer with their proton packs and crosses the streams. However, Gozer uncrosses the streams and goes in for the kill. Phoebe blasts Gozer from behind, prompting it to engage her in single combat. Phoebe is aided by the spirit of her grandfather, Egon Spengler, giving all the Ghostbusters the opportunity to blast Gozer with their proton packs, trapping it in place and allowing for the giant trap to be reinvigorated by a blast by Trevor. Vinz Clortho, Zuul, and all the souls that had been sacrificed to allow Gozer to manifest were are subsequently captured in the traps, saving the world again.

With Gozer defeated once more, Egon's business with both the Ghostbusters and his family is finished at last, and taking a moment for a fond farewell passes onto the afterlife, finally able to rest in peace.

Gozer never appears in the cartoon show The Real Ghostbusters, but has been referred to on a few occasions, the most notable example of which being when Egon stated that Cathulhu's power made Gozer look like "little Mary Sunshine".

An animated version of Gozer's face is an image used in the Kenner Ghostzapper toy weapon.

In the NOW comic book based on the cartoon, Egon was briefly transported to an alternate Earth where Gozer had apparently won and wiped out all life from it. In one panel, graffiti reading "Gozer rules!" can be seen.

Gozer made an appearance in the Ghostbusters comic books by IDW where he took a different Destructor form on Christmas as a giant talking worm with tentacles in an alternate future, during a supernatural event called the "Infestation" where an avatar of Britt coordinated a plot to capture part of Gozer's essence, wherein Ray's dream during a segment of "The Ja'nine Show", a talk show hosted by Janine Melnitz with Gozer in the audience asking Ray if he was a god before he blasted Ray who found himself hanging over the edge of the Shandor Building roof, and where Idulnas communicated with the essence of Gozer on an observation deck at the Empire State Building.

Gozer the Gozerian is usually reputed, with few exceptions, to be the most powerful being the Ghostbusters have ever faced. It displayed an extraordinary array of abilities including dimensional travel, shape-changing, telepathy, great agility and stamina, lightning blasts, invisibility, intangibility, pyrokinesis, and weather control. In fact, its mere entering that Earth's dimension caused increases in paranormal activity and the disruption of natural forces (the storm clouds and earthquake before the battle).

However, Gozer does have limitations and weaknesses (as few as they may be); primarily, the Gozerian Temple atop the Shandor apartment building was its means of entering Earth's dimension. In fact, by the time the Ghostbusters crossed the streams, Gozer had still not fully entered our world and must therefore create a form chosen by man as an irony. Because of its limited time on Earth, Gozer's true power is unknown. Had the Ghostbusters delayed, Gozer might have become too powerful for Total Protonic Reversal to stop it. This remains pure conjecture and speculation. Thankfully, the Ghostbusters did destroy the temple and banish Gozer back to its own universe. During its second coming, it had no portals to transport itself fully, so in its new (but still, Stay Puft) form, it was relatively weak and required a lot more power to absorb to become the true being it is supposed to be. Because of that, the Ghostbusters managed to finally destroy it.

Gozer arriving upon Earth from inside its precious Temple.

Gozer pets Vinz Clortho after arriving atop the Shandor Building. 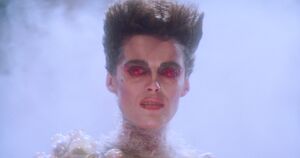 Gozer in front of its temple. 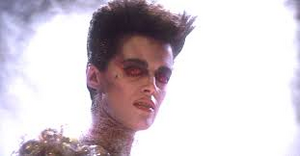 Gozer turns to face the Ghostbusters.

Gozer bracing for the Ghostbusters' attack. 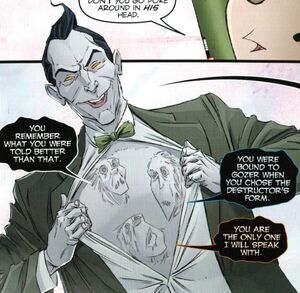 Gozer the Destructor in the form of Ivo Shandor in the IDW Ghostbusters comics. 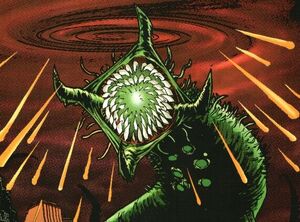 Gozer the Destructor in its true or alternate Destructor form in the IDW Ghostbusters comics. 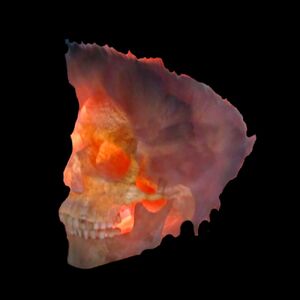 The glowing ghoulish remains of the Destructor. 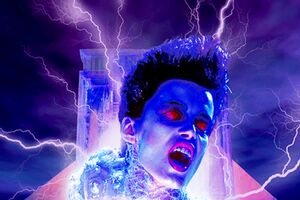 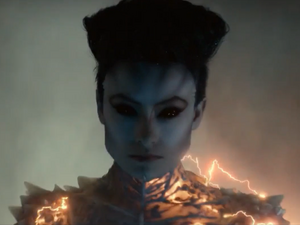