Gozo is the long-forgotten son of Gozer the Destructor. He is the main villain of the comic story "Stonehenge Revenge!" published in Marvel UK's The Real Ghostbusters 1990 Annual.

This demonic warlord wanted revenge against the Ghostbusters for destroying his "father". He came through an inter-dimensional portal at Stonehenge and, like his "father", he made the Ghostbusters team choose the form of the avenger. This time, Egon Spengler accidentally thought of a mushroom as Gozo immediately chose that as it's physical manifestation.

In order to beat Gozo now powered by England's legendary Stonehenge, the Ghostbusters destroyed the stone structure, then captured him.

Later, in the story "Equal Frights!", Gozo is released when the Ghostbusters learn that the ghosts they captured in the United Kingdom were a major part of a tourist economy. Yet, Gozo was defeated and capture again. 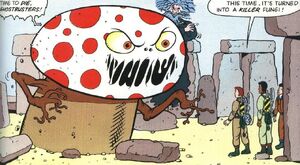 Gozo in a mushroom form.