Gríma Wormtongue is a major antagonist in The Lord of the Rings series, first appearing as the secondary antagonist of The Two Towers and a minor antagonist in The Return of the King. He was a man of Rohan and chief advisor of King Théoden before being revealed to be an agent of Saruman.

In the movies, he was portrayed by Brad Dourif, who also portrayed Chucky in the Child's Play franchise, Jack Dante in Death Machine, The Gemini Killer in The Exorcist III: Legion, Mathias in Fading of the Cries, and Deputy Sheriff Clinton Pell in Mississippi Burning.

Wormtongue was once a man of Rohan, but betrayed his fellow citizens to serve Saruman, and manipulated Théoden, the king of Rohan, until Gandalf broke his control over him with his staff. He returned to Saruman afterward, and after the Ents destroyed most of Isengard they trapped Saruman and Wormtongue inside the tower of Orthanc.

After the One Ring was destroyed, Treebeard let Saruman and Wormtongue go, and they turned to the Shire into their personal fiefdom, exploiting the native Hobbits for slave labor. After casting Saruman out, Frodo Baggins offered Wormtongue the chance to leave Saruman, but Saruman revealed that Wormtongue murdered Frodo's cousin Lotho Sackville-Baggins, and presumably ate him. When Saruman then struck Wormtongue and insulted him; this final act of cruelty, something in Wormtongue snapped, and he slit Saruman's throat. Moments later, a guard of Hobbit archers opened fire and killed him.

Wormtongue was once a man of Rohan, but betrayed them for Saruman, and they were manipulating Théoden, the king of Rohan. It is strongly implied that he murdered Théoden's son Théodred by poisoning him in his sleep. Saruman promised to give him Théoden's niece Eowyn in return for his service. When Théoden's nephew Eomer stood against him, Wormtongue had him banished. Eventually Saruman's control over Théoden was broken by Gandalf. Théoden then tried to kill Wormtongue, but Aragorn stopped him, telling him that enough blood had been spilled on Wormtongue's account. Wormtongue went back to Saruman in Isengard.

He was trapped in the tower of Orthanc along with Saruman when the Ents flooded Isengard. His ultimate fate is only shown in the extended version, however; during Gandalf and Théoden's talk with Saruman, Wormtongue appeared and Théoden unexpectedly offered him the chance to go back to his side. Wormtongue wished to accept, in order to escape Saruman's poor treatment, but Saruman slapped him. As Saruman was about to reveal where Sauron was about to attack next, Wormtongue grabbed a knife and stabbed Saruman in the back, twice. In an attempt to stop him, Legolas shot Wormtongue with an arrow, killing him, but the damage was done; Saruman fell from the balcony of Orthanc and was impaled on the spike of one of his war machines. 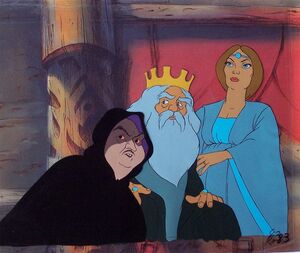 Gríma Wormtongue in Ralph Bakshi's Lord of the Rings.

Gríma in The Two Towers.

Gríma claiming that Saruman is an ally rather than the enemy.

Gríma being threatened by Éomer, after discovering that he is a traitor.

Gríma with the possessed King Théoden.

Gríma insulting Gandalf upon his arrival in Rohan.

Gríma is terrified when Gandalf frees Théoden from Saruman's spell, and his treachery is revealed.

Gríma being banished from Rohan before fleeing to Isengard.

Gríma speaking with Saruman inside the tower of Orthanc.

Gríma informing Saruman that the people of Rohan are heading for Helm's Deep.

Gríma offered forgiveness and freedom by Théoden in The Return of the King.

Gríma becoming enraged by Saruman's cruelty and prepares to murder him.

Gríma shot in the heart with an arrow, killing him. 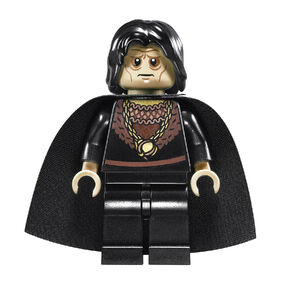 LEGO Gríma.
Add a photo to this gallery

Retrieved from "https://villains.fandom.com/wiki/Gríma_Wormtongue?oldid=4202334"
Community content is available under CC-BY-SA unless otherwise noted.