Spreading destruction to everything around it.

Wipe out the YoRHa androids (failed).

Destroy everything in sight.

Grȕn is a minor antagonist in the 2017 roleplaying game Nier: Automata. This massive mechanical entity was once used by the machine lifeforms as their protector from the android force during the Machine War, but was discarded deep in the ocean due to it going rogue and attacking the machines as well. 320 years later, it resurfaced and now seeks vengeance for the ones who abandoned it.

Grȕn first appears when the YoRHa androids were escorting the aircraft carrier Blue Ridge II through the Flooded City and protecting it against the swarm of machine lifeforms. It comes from underneath the water and bites the Blue Ridge II in half. The androids directed their fire at the giant, only for it to block their attacks with EMP blasts. When the androids destroyed one of its EMP cores, the YoRHa Command satellite laser bounced off Grȕn, revealing an EMP shroud around its entire body.

9S has an idea that Grȕn may have a weak spot in its mouth, so he and 2B leave the front line of the battle to the other YoRHa units and use a mortar at the shore to fire at Grȕn through the mouth. Although the EMP barrier was not protecting its insides, Grȕn was not damaged enough from the mortar. It activates an electromagnetic wave, causing all androids to have their flight units fall into the ocean, and smashes the mortar. 2B and 9S are launched away, but are saved by Pascal and his rookies.

9S has another idea and returns to the shore. As 2B and Pascal distract the colossal machine and deactivate more of its EMP cores, 9S directs a missile straight into Grȕn's mouth, destroying it. After its death, the remnants of Grȕn's body remains permanently deactivated among the Flooded City skyline.

Grȕn serves the same role as it did in Route A, only from 9S' perspective. After 9S uses the missile to destroy Grȕn, a cutscene plays where 9S compares Grȕn's backstory to a disobedient child; despite the child's efforts to be helpful, he kept hurting others around him, leading his people to reject him and was banished to the bottom of the sea. From the ocean depths, the child cried out for his mother, but his voice never reached anyone.

Grȕn plays no role in Route C, although its body can still be spotted among the ruins of the Flooded City. 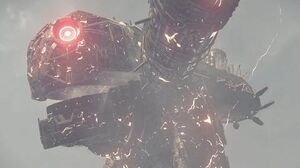 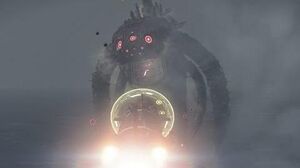 Retrieved from "https://villains.fandom.com/wiki/Gr%C8%95n?oldid=3177389"
Community content is available under CC-BY-SA unless otherwise noted.