Eating any human that they come into contact with.

Eat as much as they can.

Graboids, also known as the Dirt Dragon or Tu Lung in the 19th century, are a fictional invertebrate species that are the main antagonists of the Tremors franchise. The creatures made their debut in the 1990 film Tremors, and reappeared in all of its sequels: Tremors 2: Aftershocks (1996), Tremors 3: Back to Perfection (2001), and its 2004 prequel Tremors 4: The Legend Begins. They were also featured regularly in the series' spinoff Tremors: The Series (2003), with El Blanco being a recurring character. A variant was featured in the 2015 film Tremors 5: Bloodlines.

Graboids are giant, predatory, worm-like cephalopods, which makes them related, albeit distantly, to squids and octopodes. They have no eyes and seem to grow through metamorphosis in the same way butterflies do. They live a larval underground existence, and rely on the sense of earth vibrations to hunt their prey. They also have a beak and many tongues with mouths on them. The worm-like graboids give birth to shriekers which come out of the mother's stomach, killing her. Shriekers have two legs and heat sensors, they give birth by rejecting an egg from their mouth. Shriekers then become ass-blasters which have wings and fly by ejecting fire from the anal cavity. It is believed that graboids are mollusks that originated in the Devonian (some sources even say Praecambrian) period, before the age of dinosaurs. The graboids prey on humans and animals, rising up from the ground to capture them. Both living and dead Graboids are also known to give off a terrible stench.

According to promotional material put out by the Sci-Fi Channel intended for the TV series, the Graboids' official designation places them in the Kingdom Animalia, Phylum Bilateria, Class Cephalopoda, Subclass Coleoidea, Order: Sepioida, Family Vermiformidae, Genus Caederus, Species americana. Using the obsolete Linnaean taxonomy, this would, if true, mean that Graboids are most closely related to terrestrial cuttlefish.

Graboids are shown to be ravenous carnivores, always on the hunt for food. Indiscriminate eaters, their diet includes but is not limited to sheep, cattle, horses, donkeys, coyotes, and even humans. They are known to be cannibalistic when the opportunity presents itself; El Blanco consumed an Ass Blaster in Tremors 3. Lacking eyes or a nose, they're shown to hunt by sensing seismic vibrations, which are produced by sounds and movements. Because they are unable to tell the difference between edible and inedible vibration sources they adopt a policy of "eat first, ask questions later", simply swallowing whatever sets off their vibration sensors and regurgitate anything that does not taste good. Inedible objects can be spat out with amazing force, being propelled high into the air. Due to the sensitive hearing they use for underground navigation, Grabboids are so sensitive to sound they must retreat from loud explosions, which cause them great pain due to sensory overload. For the same reason, Graboids are unable to hunt during rainstorms. The scientific explanation for this is based on the fact that scientists recently learned that rain is one of the loudest sounds underwater in the ocean.

Graboids are ambush predators, preferring to sneak up on their quarry, though they are shown to chase it down with great determination. They erupt from the ground and use their tentacles to ensnare prey, pulling them into their mouths. The tentacles wrap around the prey, biting into its flesh or hooking the prey with their horn-like spikes. When the prey attempts to flee by climbing, Graboids will simply dig away the earth under the hiding place, undermining it until it collapses or sinks low enough to allow the Graboid to pluck off the hiding prey. When they are unable to break down the prey's hiding spot, the undaunted Graboids will continue circling it like sharks until it ceases making vibrations. Usually, they wait so long the prey dies of dehydration or starvation, i.e. several days.

The Shrieker, it is the second life cycle stage of the creatures featured in the series; the Graboid being the first and the Ass Blaster being the next and final. The Shrieker can be seen as a kind of pupa without the immobility, or a nymph even though a nymph would be the young beginning stages for animals (insects) with incomplete metamorphosis, the Shrieker being the middle "teen" stage. And the Graboid species clearly shows a complete metamorphosis. The name "shrieker" was given to the creature by the special effects crew of Tremors 2 and later introduced to the audience in Tremors 3.

Shriekers are asexual, and as such only have one role, make more Shriekers, once they eat enough food they reproduce. When they reproduce the fetus that is attached to the lining of their stomach/uterus detaches from the lining of this organ. They then open their mouths to the greatest extent and with a good deal of screeching deposit a fetus on the ground the baby immediately begins to stand up also it was observed that it already seem to begin to grow. Kate Reilly theorizes that they must be able to repeat this feat, one becomes two, two becomes four. This is proven in later additions and in the same movie, in fact, it has an unknown number of fetuses lining its stomach/Uterus. The process of giving birth can lead to stress however which will eventually lead to death.

Unlike their previous incarnations, the huge, subterranean and limbless Graboids, Shriekers live on the surface. Much smaller than Graboids, Shriekers are about 4 feet long and 3 feet tall with their jaws pieces about one and a half feet long. While Graboids are worm-like in shape, Shriekers slightly resemble dinosaurs or heavy ground-dwelling birds, having stout, three-toed legs and a compact body. They also have a short, stump-like tail. This tail, as well as some small bulges in the neck, has some orange coloring on it. While its function is unknown it could possibly be the early stage of the Ass Blaster tail and could have the chemicals already present in small quantities; or it could even be used in signaling other Shriekers. The one thing that shows Shriekers are related to Graboids is their skull - just like a Graboid's, it consists of a powerful, beak-like armored upper jaw and a much narrower lower jaw and the mandibles have sharp hooks and serration’s, ideal to hold prey. Inside the "beak" is a slightly prehensile tongue that they use to pick up smaller pieces of food or other edible material, they do this by dragging their tongue over the ground. Sometime during their twelve-hour molting it is believed that they lose the ability to duplicate and instead their bodies convert over to being able to lay eggs. After surviving for at least 24 hours, the Shriekers will molt into Ass Blasters.

The Ass Blaster is the term for the third and final morph/stage of the Graboid's life cycle, the imago stage, much like how "butterfly" is the term for the imago stage of a caterpillar. A Shrieker having achieved maturity, enters the third known phase of the Graboid life cycle: the Ass Blaster. The Ass Blaster differs from the Shrieker in three significant ways: It possesses wings, has a rocket-like ability to launch itself into the air, and it has the ability to lay eggs. It is considered by some (including Burt Gummer), to be an even larger threat than Shriekers and Graboids due to their heat-seeking abilities and ability to glide after blasting off. This ability to fly is the result off the Ass Blaster's most unique trait in which the Ass Blaster works two chemicals into it's tail section. They come from two separate organs in the body with these, in turn, go to two separate sacs that inflate with the chemicals so that they can mix them in the air and blast off. Once these two chemicals mix, they become volatile and react violently when exposed to the air, creating a lifting explosion. Much like the Bombardier Beetle. Their African Counterpart operates on a slimmer principle.

The Ass Blaster's appearance is slightly different from it's previous Shrieker form and that the body is longer but more slightly built with fin-like wings used for controlled gliding. The skull is far thinner than the last two forms and is a glossy black contrasting with the Ass Blaster's mostly reddish orange body and tan wings. It does not seem to have ears or at least earholes, yet they have some hearing capability similar to the earlier Graboid morph. They are just over six feet long, tip to tail, about three feet high, and have head and jaw about two feet long. The heat-sensing organ is far more compact being like two slits for eyes as the creature visibly looked left, right and down when looking for the movie protagonists. When the Ass Blaster premiered, in Tremors 3: Back to Perfection, it resulted from the Shrieker reaching their molting period of 12 hours though there have not been subsequent examples of this. They molt out of the skin of the shrieker leaving it and an orange liquid material left behind. The flame resulting from the Ass Blaster's take off is exceedingly hot, a fact of acknowledged when one of them started to use it to melt the door to Burt's safe room open. This heat also works in their favor if someone tries to tranquilize it, as the sheer heat in the posterior region of an Ass Blaster will neutralize the effects of any tranquilizers to strike its rear end. 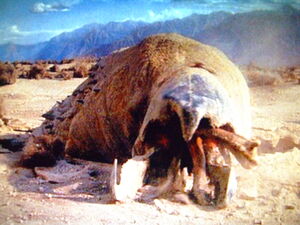 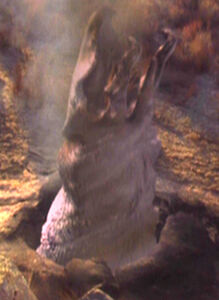 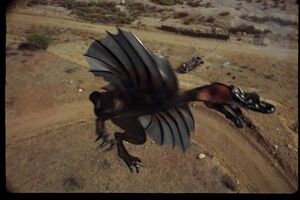 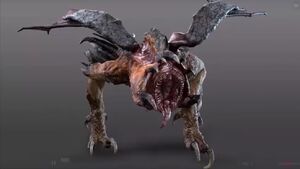 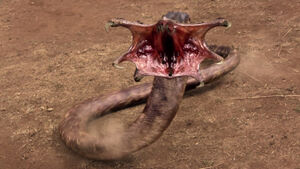 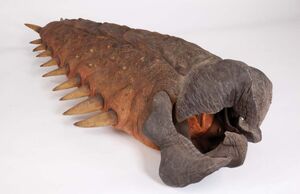 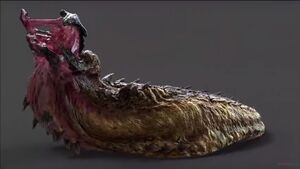 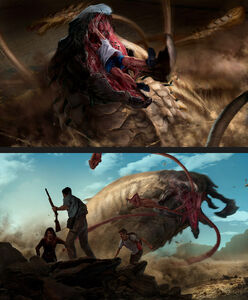 Retrieved from "https://villains.fandom.com/wiki/Graboids?oldid=3767799"
Community content is available under CC-BY-SA unless otherwise noted.