Elemental Demon
Gracos is one of the four Dread Fiends and one of the main antagonists in Dragon Quest VI. He is a portly merman-like monster who destroyed Ashlynn's home, Sorceria, and sealed its Dream-World counterpart, leaving a large crater in its place. He uses a polearm to fight and knows some dangerous spells.

After his defeat, the seal of Sorceria breaks and the city emerges once again in the Dream World where the sorceress Ashmerelda teaches Ashlynn Magic Burst before being found out and killed by the Archfiend, Gracos' master. Ashmerelda simply says she had already considered this could happen, but she is still glad that she could pass on the spell to her possible successor.

Gracos has another major appearance in this game. Before any of the events in the game, he uses his powers to sink the citadel where the Four Great Spirits were revered, turning it into a monster-ridden dungeon. When the heroes travel to the past and arrive at the lands he made disappear, they presence as he completely submerges the lands of Wetlock, Hardlypool and Spilton-on-Sea under the sea to have everyone drown and get their souls. Fortunately, the Old Man Riffer had used his torban to put the people to safety at the Highendreigh Tower, but it wouldn't be long since the monster had the tower swallowed by the waters too. So the heroes decide to act quickly; they travel to the Sunken Citadel and confront Gracos. Here, they discover that the fiend uses the souls of the previous inhabitants of the citadel as his playthings and commands them to attack the group. After they're defeated, Old Man Riffer uses his torban to free the posessed souls, so Gracos decides to confront the group himself. After a harsh battle, he falls defeated and the troubadour uses his torban for the group to escape the tower where they found the waters have receded. 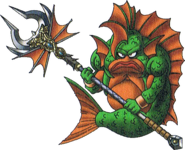 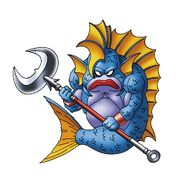 Retrieved from "https://villains.fandom.com/wiki/Gracos?oldid=3889588"
Community content is available under CC-BY-SA unless otherwise noted.