Eating any mortals coming to visit them

Kill Perseus like all humans who they killed before him. (failed)

Tell Perseus what he wants to hear to get their eye back. (succeeded, sort of)

The Graeae (English translation: "old women", "grey ones", or "grey witches"; alternatively spelled Graiai (Γραῖαι) and Graiae) were three sisters who shared one eye and one tooth among them. They are one of several trios of archaic goddesses in Greek mythology. Their names were Deino, Enyo, and Pemphredo.

The Graeae, also known as the Stygian Witches or the Grey Sisters, were three grey haired hag-like sisters in Greek mythology. They were the children of the elemental gods Phorcys and Ceto, and they were the goddesses of old age. They had grey hair, empty eye sockets, and toothless mouths from birth. They were the sisters of the gorgons. Because of their lack of godliness, the Graeae were given jurisdiction over a swamp. They were also given an eye to share among themselves. This eye gave them great knowledge and wisdom. When the Gorgons were cursed by Athena, they entrusted their locations to the Graeae, who kept quite for them until the day they met Perseus. Perseus was on a quest to destroy Medusa. He went to the lair of the Graeae for information of her whereabouts. He took their eye, and threatened to throw it in the swamp unless they told him where the gorgons were. Reluctantly, the Graeae told Perseus where Medusa was.

In later versions of mythology, the Graeae were described as beautiful, apart from the fact that they had only one eye (they all had teeth in this version). This incarnation of the Graeae was not at all malevolent and evil like the original version. They willingly told Perseus the whereabouts of Medusa. Since good looks and personalities don't fit the characters, this version of the Graeae has been generally ignored by modern day media.

Original Clash of the Titans

A different version of the Graeae appeared in the original Clash of the Titans. Instead of a swamp, they lived in the Stygian Wrealm. In the movie they were referred to as the Stygian Witches. It is important to note that they were of ungodly and blasphemous descent. They were mortal, and had no relationship with the gorgons.

They lived in the Stygian Wrealm, killing and eating any lost travelers who stumbled upon their cave. They all had teeth, and shared a magical eye which not only gave them sight, but also magical knowledge and power. When Perseus came to their lair, they had a human cooking in their pot. They tried to trick Perseus into coming closer to them. When he didn't, they moved toward him. But then Perseus' owl, Bubo, snatched their eye and gave it to Perseus. Perseus forced them to tell him how to defeat the Kraken. They told him that the only way a human could kill the the Kraken was with the head of Medusa.

The Three Fates Disney's movie Hercules had features reminiscent of the Graeae. The were rotten and hag-like, and they all shared one eye. Because of the this, the Graeae and the Fates are often confused with each other.

Percy Jackson and the Olympians: Sea of Monsters

In the second Percy Jackson book, the Graeae were taxi drivers in the Tri-State Area. They were hags, with grey hair, one eye, and one tooth. They could only be summoned by throwing a magical coin into a certain place in the pavement. It took all three of them to drive because of the one eye feature, and they spent most of the time bitching about who got the eye and the tooth.

New Clash of the Titans

A version similar to the Stygian Witches of the original Clash of the Titans appeared in the remake. In the new movie they looked undead, and and had no eye sockets. They saw through the eye by holding it in their hand. Like the Stygians of the first movie, they were not of godly Descent, but they were immortal. They are the most witch-like version of the Graeae. Their sentences are half comprised of strange words and tongues. They often say "The eye!" out of the blue.

Io said that seeing the future had twisted the three witches, and that they were unpredictable. She also said that she and the witches were sisters in the sense that they had been touched by the gods. When Perseus and his men arrived at the Stygian's lair, and said that they needed their counsel, the witches said that the knowledge demanded payment. They then attempted to grab the youngest soldier. But Perseus took the eye and threatened to drop off the cliff.

The witches told Perseus, with much jibberish and "The eye!" between their sentences, how to kill the Kraken. As Perseus left, the Graeae told Perseus that he would die. 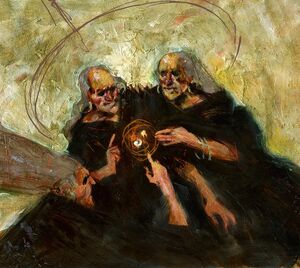 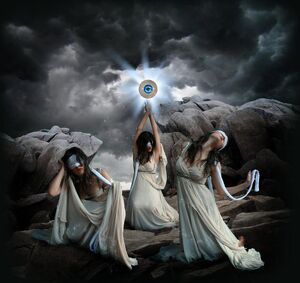 The Graiae
Community content is available under CC-BY-SA unless otherwise noted.
Advertisement