GranKuwagamon are minor villains in Digimon Xros Wars and the reboot of Digimon Adventure.

A huge ammount of GranKuwagamon serves Kongoumon as his air force. 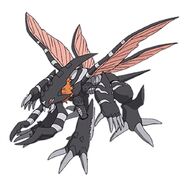