Leader of the Doomers

Kill Kirby and his friends.

Grand Doomer is a supporting antagonist in Kirby's Return to Dream Land. It is presumably the leader of the Sphere Doomers and possibly the entire Doomer species.

The Grand Doomer serves as the boss of Nutty Noon and is the final boss of Pop Star. It holds and guards the Lor Starcutter's final part, the mast. When Kirby and friends enter the level, the mast is in plain sight. When they touch it, the part obtaining sequence plays, but it fades out as the part moves out of sight and Grand Doomer appears.

The large bat-like creature eats the part, forcing Kirby and the gang to fight it to gain the last part. Grand Doomer attacks by shooting fireballs from its mouth and has the ability to create four black holes, three of which disappear and Grand Doomer rushes out of the fourth. It can also bury itself in the ground shown by a black puddle. If Kirby or the others are above the puddle, they will be sucked in and take moderate damage unless they can shake out of it.

After half of its health is depleted, Grand Doomer moves much faster and shoots more fireballs. Once after depleting almost all of its health, Grand Doomer encases itself in a stone-like substance and rolls around the arena to crush the players, summoning numerous enemies between each roll. It cannot be damaged during this phase unless Kirby obtains the Ultra Sword from a Super Blade Knight that Grand Doomer may summon. It takes four swings to smash the stone shield, and if Kirby does not follow up quickly with a fifth and final strike, Grand Doomer regains the shield again. Once Grand Doomer goes down, it drops the mast.

In Extra Mode, Kirby and the gang fight Grand Doomer EX, who fights similarly to the normal version, although it spits fireballs at a much faster rate and its swoops cannot be dodged by crouching. 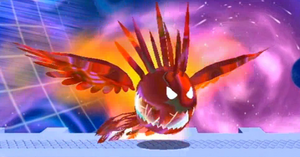