Ruler of the owls

Stop the sun from rising.

The Grand Duke of Owls is the main antagonist in the 1991 Don Bluth animated film, Rock A Doodle. He is a magical owl and he is the leader of the other owls. He hates his nephew, Hunch.

He is voiced by Christopher Plummer.

He is an owl who hates light. *Note the goof in his movie; He bakes a pie near an oven with only little light. Really, he is a villain who hates all types of lights: flashlights, streetlights, lamp lights, firelights, and cameralights, which is what Peepers uses to blind the Grand Duke's minions when they pull up the toy box boat to stop them from reaching the city because he doesn't want the sun ever to rise again.

He banishes Chanticleer. Edmond broke the Duke's glasses and called Chanticleer's name, this caused the Duke to turn Edmond into a kitten as punishment so he can eat him but is rescued by Patou the dog. In the climax, he becomes a giant magical being and prepares to take over the world and crushes Chanticleer and Edmond tries to revive him but the Grand Duke chokes him, rendering him unconscious and at the edge of his life. Eventually the animals revive Chanticleer by cheering him on and he crows causing the sun to come up and the Grand Duke shrinks, and his nephew, Hunch, whom he abused throughout the movie decides to abuse him because he's now smaller and weaker. It is unknown if Hunch killed the Duke or not. Because of his size, Edmond is turned back into a boy again causing Edmond's punishment to be over, and the spell to be broken. Edmond learned the error of his ways and he no longer is afraid. 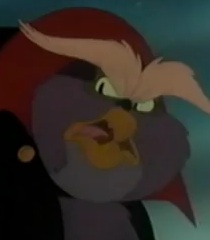 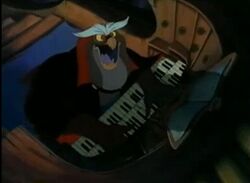 The Duke's villain song, "We Hate the Sun" 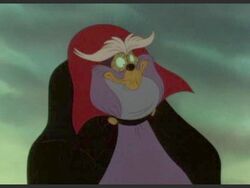 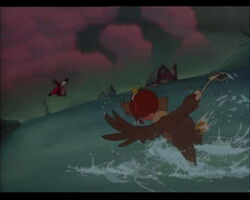 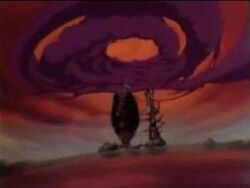 The Duke rising to power 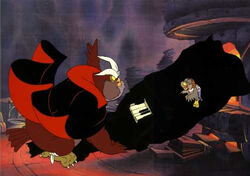 The Duke with Hunch

The Duke attacking Edmond
Add a photo to this gallery 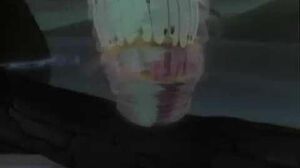 Retrieved from "https://villains.fandom.com/wiki/Grand_Duke_of_Owls?oldid=3465366"
Community content is available under CC-BY-SA unless otherwise noted.