Grandfather (by the six lion demons)

Leader of the six lion demons

Kill Sun Wukong to avenge his god-grandson known as the Tawny Lion Demon.

The Grand Saint of Nine Spirits (in Chinese: 九靈元聖) is an antagonist in the classic Chinese novel Journey to the West. He is actually the Nine Headed Lion that Taiyi Jiuku Tianzun rides on, who had managed to escape into the mortal realm.

The Nine Headed Lion is different from most other demons in the novel in a sense that it neither harms humans nor seeks to taste Xuanzang's flesh. In fact, he never shown harming anyone until the events of the arc took place, nor any intention to eat any human. He also genuinely cares for his god-grandsons, showed griefs upon hearing their defeats, and vowed revenge by torturing and killing Sun Wukong for killing the Tawny Lion Demon, his most prominent god-grandson. His master, the Taiyi Jiuku Tianzun, also stated that normally the Nine Headed Lion is a very peaceful creature who never harm anyone.

The Grand Saint of Nine Spirits is originally the Nine Headed Lion, the pet of Taiyi Jiuku Tianzun. One day, the boy in charge of looking after the lion once secretly drank a special potion and fell asleep for three days in Heaven (equivalent to three years in the mortal realm), allowed the lion to seize the opportunity to escape into the mortal realm. There, he builds his base at Jiuqu Panhuan Cave (九曲盤桓洞) at Bamboo Links Mountain (竹節山) near the Kingdom of Yuhua (玉華國). The six lion demons living around that area revere him as their grand ancestor. Upon knowing that one of his god-grandsons, the Tawny Lion Demon was attacked by Sun Wukong, the Grand Saint of Nine Spirits leads his army of lions to avenge him, and successfully captured Xuanzang, Zhu Bajie, Sha Wujing and the royal family of Yuhua, and has them imprisoned. He is angered when he learns that the Tawny Lion Demon has been killed by Sun Wukong, and wants to take revenge by capturing and killing Wukong. Wukong had to met Taiyi Jiuku to learn about his origins. Later on, Wukong lured the Grand Saint out, where he is eventually subdued by his master and taken back to Heaven.

The 1986 series followed a similar format like the original novel, however The Grand Saint's role is much more simplified. Here, instead of agreeing to help the Tawny Lion Demon right away, he refused to do so as doing so might getting into even further trouble with Wukong. However after the Tawny Lion Demon is killed by Wukong himself, he captured Xuanzang, Zhu Bajie, Sha Wujing and the royal family of Yuhua, vowed to capture Wukong and then kill them all to avenge his god-grandson. Wukong later met his master, who managed to subdue him and took him back to Heaven.

This version of the character appears to live alone, as the other five lion demons were omitted here. He has no known servant. 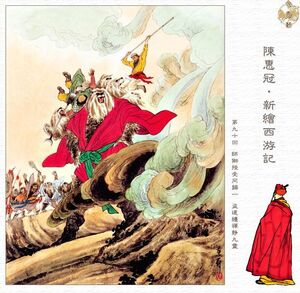 Grand Saint of Nine Spirit in the novel.
Add a photo to this gallery
Retrieved from "https://villains.fandom.com/wiki/Grand_Saint_of_Nine_Spirits?oldid=2832466"
Community content is available under CC-BY-SA unless otherwise noted.