Broadcast the Happy Show Show to the entire world

Annie Taters, better known as Grandma Taters, is an antagonist in The Adventures of Jimmy Neutron: Boy Genius. She is a seemingly sweet elderly woman who is Mr. Fluffy's owner and the former host of The Happy Show Show.

She was voiced by Edie McClurg.

On the surface, Taters is seemingly as kindly and sweet as her appearance would imply, but this is a facade designed to entice people into her schemes, which involves brainwashing. She will continue this facade even as she engages those who see past her sweet image, more than happy to pit her wits against them. When engaging Cindy in one-on-one combat however, she showed a very aggressive streak. Luckily, Jimmy and Cindy stopped her evil plan and returned their friends and families to normal. When she went back to her planet with her sisters, she vowed revenge on the two.

Grandma Taters appears as an elderly woman with graying hair and glasses, wearing stereotypically "sweet" clothing befitting her nickname, and speaks with a very endearing voice.

Her eyes are kindly until she reveals her true nature as an alien, during which they become pitch black. Similarly, her voice may take on a deep, multilayered tone when angered. 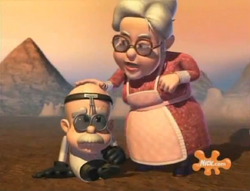 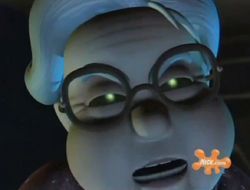