The Master of Games
God of Games

Manipulating life forms into playing games on life and death.

Manipulate every single life form in the universe, especially heroes and villains, into playing special games of life and death.

En Dwi Gast, better known as the Grandmaster is a supervillain from Marvel comics and a godlike alien who is immortal and obsessed with games of chance - he is a master manipulator of the highest order and often pits groups of heroes and villains into battles or puzzles as part of large-scale cosmic bets and challenges. He's also the secondary antagonist of the JLA/Avengers crossover story.

Grandmaster is an extremely sadistic and manipulative individual. Best known for his obsession to manipulate life forms into playing his games on life and death, Grandmaster is rarely pure sadistic mastermind as he enjoys of creating games and to watch the "players" die or fighting to the death.

In addition, Grandmaster is a highly intelligent and ruthless individual, as he is enjoying from attempting killing or just killing life forms without remorse. More than that, Grandmaster is also a pure megalomaniac as he gloats about the vast power that he has in the games. Also, he is a tyrannical and petty individual as he obsessed with conquering the universe and controlling his games with an iron fist.

In addition to his evil personality, Grandmaster is an extremely childish being as he just enjoys from making games of life and death just like as a 6 year old boy enjoys of playing with action figures.

Grandmaster was part of the Elders of the Universe - godlike beings that represented the eldest species of the universe, they were also largely sole survivors of their respective species and had cosmic powers comparable to beings such as the Watcher.

Like all Elders of the Universe the Grandmaster is kept immortal only due to his fixation on a particular subject: in his case games of chance - if he should lose interest in his obsession he would weaken and die, he alongside a number of his fellow Elders attempted to kill Galactus at one point, theorizing that in his death they would be reborn as gods in the new universe (despite already having semi-godlike powers): their plan was foiled by the Silver Surfer and several other heroes.

Later, during the ''Thanos Quest'' story, the Grandmaster is challenged by Thanos for the possession of the Mind Gem, one of the Infinity Gems. The Grandmaster and Thanos fought in a Dangerous virtual reality game, wearing battle armor. At first, the Grandmaster seemed to be the winner, as he trapped Thanos with a parasitic fungus and he started gloating about his victory, saying that he let Thanos near him so he could take the other Infinity Gems from him. But, to the shock of the Grandmaster, the defeated Thanos was actually a robotic duplicate while the real Thanos trapped the Grandmaster inside his own virtual world and then took the Mind Gem with no problem.

Since then he showed up in various other stories playing games with various characters including Korvac and Quasar. In the crossover mini-series JLA/Avengers. the Grandmaster organized the meeting of the Avengers and the Justice League in an attempt to save the Marvel universe from Krona, when Krona came to the Marvel Universe seeking answers about the origin of creation. In an attempt to save his universe, Grandmaster challenged Krona to a game for the identity of a being in the Marvel Universe who had lived through the Big Bang by pitting the Avengers and the JLA against each other in a 'scavenger hunt' for twelve items of power- with Krona choosing the Avengers as his team, only for Krona to turn on the Grandmaster when he lost due to Captain America helping Batman gain the Cosmic Cube. Although Krona's anti-energy powers were able to easily defeat both the Grandmaster and Galactus, the Grandmaster revealed the game was a trick and was able to use the items gathered to merge the two universes and trap Krona in their 'junction point'. However Krona accelerated the process, with the intention of destroying both universes and learning their secrets. The Phantom Stranger guided the two teams to the Grandmaster, who showed them the truth of reality, then died. However the Grandmaster was restored to life when reality was returned to normal, and it was revealed he had been playing a game with Metron of the New Gods.

The Grandmaster appears as the secondary antagonist in the Marvel movie Thor: Ragnarok and is played by actor Jeff Goldblum.

In the film, he is the supreme ruler of the planet Sakaar. He is also confirmed to be the brother of the Collector, who briefly appeared in Thor: The Dark World and Guardians of the Galaxy. 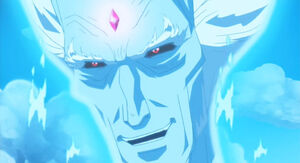 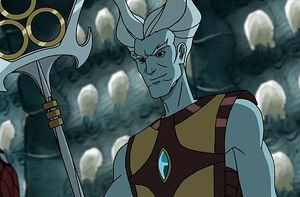 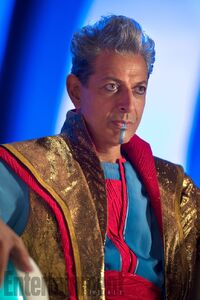 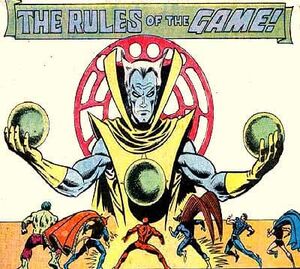 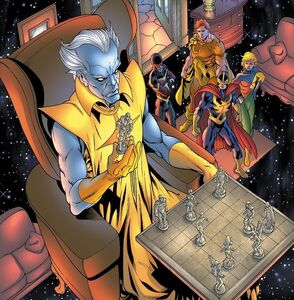