NOTE: This article is about the incarnation of the Grandmaster from the Marvel Cinematic film series. The mainstream version can be found here: Grandmaster (Marvel).

Forcing life forms to fight each other for his amusement.

Sabotaging fights to his own favor.

Maintain his reign of Sakaar by all means necessary (presumably failed).

The Grandmaster is a recurring antagonist in the Marvel Cinematic Universe, serving as a cameo character in Guardians of the Galaxy Vol. 2 and later as the secondary antagonist of Thor: Ragnarok and will return in some capacity in its upcoming sequel Thor: Love and Thunder. He is the ruler of the planet Sakaar who enjoys putting life-forms into gladiatorial fights for his own amusement. A version of him also serves as a minor character in What If..?

He was portrayed by Jeff Goldblum, who also played Brundlefly in The Fly, Calvin "Slick" Stanhope in Silverado, Verminous Skumm in Captain Planet and the Planeteers, Long Eared Jack in Robbie the Red Nose Reindeer, Niagara / The Wolf King in Hotel Artemis and Dr. Erwin Armstrong in The Boss Baby: Family Business.

The Grandmaster makes a cameo appearance during the film's end credits, where he is shown dancing alongside the Guardians following the death of Ego.

In the film, the Grandmaster had dedicated much of his desire to win the people's hearts by using different life-forms in a gladiatorial event (known as the Contest of Champions) held in a large arena on Sakaar. He is aided by his personal bodyguard Topaz, and took in a sole Valkyrie dubbed 142 as a new bodyguard following the massacre of Valkyries committed by Hela (the Asgardian Goddess of Death).

The Grandmaster even got 142 to successfully capture the Hulk (who exiled himself from Earth following the deaths of Ultron and the Ultron Sentinels two years ago), and he made Hulk his new champion due to the latter's super strength that has admired much of the Sakaarian people.

Eventually, Thor manages to escape from confinement and freed the Hulk from the Grandmaster's control by using a recording of Black Widow. Outraged by this action, the Grandmaster orders the Sakaaran Guards to capture both Thor and the Hulk, but after reliving the deaths of her fellow Valkyries (thanks to Loki's magic), 142 decides to help Thor in defeating Hela, even capturing Loki to prove her goodwill.

Working together, Thor, Hulk and 142 staged a revolution against the Grandmaster and his forces by freeing the other gladiators from confinement. After sending Topaz to her death, Thor, Hulk and 142 head over to Asgard through a wormhole in order to save the surviving Asgardians from Hela and her army of Berserkers. Even Loki and several gladiators provided one of the Grandmaster's giant ships to evacuate the Asgardians as Loki summons the fire demon Surtur (per Thor's orders) to destroy all of Asgard, killing Hela and the Berserkers in the process.

Following the film's end credits, the Grandmaster is last seen being confronted by several of the rebels, who have now overthrown him after defeating his forces. He attempts to appease the rebels by taking credit for the revolution and claiming that a revolution cannot be had without having someone to overthrow, declaring the revolution "a tie". 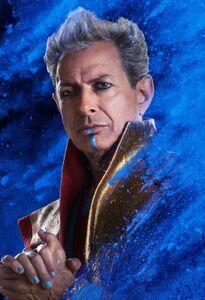 The Grandmaster addresses the Sakaarian crowd on the start of the Contest of Gladiators.

The Grandmaster watches in amusement as the Contest of Gladiator was about to commence until a major surprise happened.

The Grandmaster watches in shock and confusion in which he hears Thor screams in joy upon seeing the Hulk while Loki watches in subtle nervousness in which the latter recalls his encounter with the Hulk during the Battle of New York.

The Grandmaster pardons his cousin Carlo before gleefully executing him using a Melt Stick with Topaz watching the execution at his side, much to Thor's horror.

With Topaz at his side, The Grandmaster threatens Loki and 142 to find Thor and Hulk after the latter escaped from imprisonment.

The Grandmaster making an announcement to the citizens of Sakaar as he informs them of Thor's escape and urging them of stopping him.

The Grandmaster declaring the Revolution a tie as he confronts his rebellious subjects and proposes to them a neutral compromise.