Power over creation of life

Taking over planets and reshaping life to fit his desires.

Rule over Earth as the God of a newly created human race of his design.

Grandmaster Meio (in Japanese: 冥王グランドマスター, alternatively Meiou/Meioh, meaning Lord of Darkness), better known as "The Grandmaster", is the main antagonist of the Strider video game series, being the main villain of the first two games and the 2014 remake.

He is an evil otherworldly entity with nearly godlike powers and intelligence. His origins, precedence and purposes are entirely unknown, and there are rumors that he is not actually human but an alien lifeform. Grandmaster Meio appeared one day on Earth and waged war to claim it as his own in order to perform twisted experiments to achieve his greatest goal: to become a God by shaping up life to his heart's content.

In this retelling of the first arcade game, Grandmaster Meio rules Kazakh City with an iron fist and made the fearful people obey him under martial law, having ruled it since 0000 Meio. Those caught loitering in the curfew will be detained and those who tamper with government equipment will receive a public punishment and imprisonment. He finds mankind imperfect and is planning to remake the world in his own likeliness. To this end he commissioned the creation of Gravitrons as part of his scheme to wipeout mankind by installing one in his base the Third Moon and triggering mass destruction across the planet and replace mankind with a new race to sate his ambitions. One of the scientists involved was imprisoned for opposing this while another managed to escape Meio's forces and become the Black Marketer leading the resistance.

After the Strider organization loses 11 agents, Hiryu is tasked to invade Kazakh City and assassinate Meio. As he fights his way through Meio's forces, bounty hunters such as the Four Winds and Solo were commissioned to kill him. With Nang Pooh announcing to the people of Kazakh City to see what happens when they defy the Grandmaster.

Much later after Hiryu destroys the second Gravitron and defeats Mecha Pon, Meio furiously kills Schlange for failing him one time too many and throws Mecha Pon's body towards Hiryu, sending both plummeting down a shaft. However, Hiryu manages to survive the fall.

Observing Hiryu's prowess, Meio orders Juroung to hunt down and kill Hiryu in the underground. But Hiryu manages to best him as well.

After Hiryu infiltrates his tower and reaches Meio. The Grandmaster orders Hiryu to serve him, but Hiryu rejects this offer because he will not obey him or any other "dead man". Seeing this a disappointment, Meio calls him imperfect, states the world is his and that Hiryu must die. After Hiryu manages to win out in this dangerous fight, Meio warps out and Hiryu pursues him where a transformed Meio exclaims his plan to create a "perfect race". Meio unleashes his wrath on Hiryu, but Hiryu manages to gain the upper hand and mortally wound him. Hiryu then rides a dying Meio back down to Earth. Once he returns to the outskirts of Meio's Tower, Hiryu reports his success in assassinating Meio.

Grandmaster Meio does not appear to hold any level of superior physical strength, and instead relies on his intelligence and vast powers to attack his enemies from afar. Among his known abilities, Meio has the power to levitate and move through the air at high speed, a variety of devastating energy attacks unleashed from his hands and the ability to instantly teleport from one location to another. But what's likely his best known ability is the power of creation, the ability to create organical "lifeforms" through lightning shot from his hands.

Meio is shown having an apparent unlimited control over his ability to create life. There seems to be no limit in the complexity or nature of the lifeforms, as he can produce both simple forms like fishes and more complex forms like dinosaurs and even humans, and he's also shown able to create mechanical creatures such as Lago and organic monsters like Caduceus. Using this ability in combat, Meio seeks to restrict his enemies' movement by filling out the area with several forms in constant movement attacking their target, which in turn makes Meio's own attacks harder to dodge.

The Grandmaster is evil, ruthless and very intelligent. Lacking in any sort of moral sense, he shows no respect for life and only sees it as a plaything for him to control and manipulate. He creates life only to further his own grandiose goals of godhood, and just as easily can decide to kill them all if they don't live up to his expectations. He truly despises the original human race, thinking of them as inferior beings created by "old gods" that have no reason to exist. Meio shows a great level of intelligence, being able to create both organic and technological wonders with apparent ease, and charisma to sway political and military figures to his side. Every subordinate of his is deeply loyal to him to the point they dare not say his name, instead calling him by pronouns or simply "The Lord".

Grandmaster Meio has an unhealthy obsession for total control and a limitless ambition. He was not content with simply ruling Earth, he needed total control of its inhabitants, for every living being on its surface to see and worship him as their only God. To see all life unified into worshipping him drives his ambition to create a perfect race to inhabit the planet. As a result, he's also constantly disappointed in his creation, feeling they squander the gifts he provides and finding them incompetent and easily disposable. Even his most loyal subordinates are inconsequential to him, and he will execute them if they fail at their orders. Meio will forever continue performing his experiments until his perfect race becomes a reality.

Grandmaster Meio is extremely arrogant and confident in his god-like powers. He believes himself a being that has evolved far beyond inferior notions like existence and believes this grants him the right to do as they please with life. His tendency to greatly underestimate others tends to become his unmaking, such as him leaving the Striders or Hiryu unchecked until its too late. 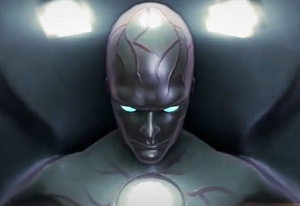 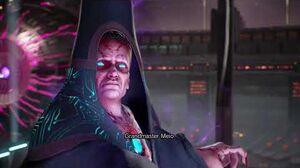