Power over creation of life

Taking over planets and reshaping life to fit his desires.

Rule over Earth as the God of a newly created human race of his design.

Grandmaster Meio is the main antagonist of the Strider videogame series, with this original incarnation being the main villain of the first two games.

One day, Grandmaster Meio suddenly appeared on a war-torn Earth in the year 2042, and quickly settled himself on the Eastern side, usurping power in the Russia Empire and turning its capital city on the Kazakh Federation into his seat of power. He then used the empire's extended military and scientific power to wage war against the remaining nations of the world. The nations joined together to fight back, but after 5 years of conflict the Grandmaster's followers, led by General Mikiel and Captain Beard Jr. (a defector from the allied forces), managed to achieve victory and became the ruler of Earth. Using the most advanced science on the planet, he built a satellite station known as the Third Moon, from where he rules over the planet unopposed. He then established a new calendar beginning in the year 2048, "Meio Year 1".

Grandmaster Meio's greatest desire, however, is to become a God worshipped by all inhabitants of Earth. But this proved impossible for him, as there still exists rebel groups opposed to him and primitive tribes only able to worship him on a very basic level. In order to carry out his desires, he researched the lifeforms on the Amazon until he discovered the secrets of life, gaining the ability to control the power of creation itself, allowing him to summon any lifeform he desires with a raise of his hands.

He then proceeds to carry out the "Third Moon Plan", removing his station off the Earth's atmosphere using an Anti-Gravity Device in a way it'd burn off all life on Earth with thermonuclear weapons, so he could replace the old humans or "Sons of Old Gods" with a newly created humanity of his own design. In this way, he'd become the legitimate Creator God of Earth.

The reckless driving of his subordinates on Earth, however, would play against him when the rebel forces sought the assistance of the Striders. Assigned the mission to stop the Grandmaster, Strider Hiryu infiltrates the Kazakh Federation and brings its entire council down. Grandmaster Meio puts a bounty for Hiryu and sends assassins and bounty hunters after him, including the vicious Tong Pooh and the unmatched bounty hunter, the undefeated Solo. Hiryu defeats all enemies on his path and eventually reaches the Third Moon for a final confrontation against Meio. After a long battle, Meio is defeated for good.

In spite of his defeat, Meio's plans for Earth would continue on their own. 2000 years after his defeat, the planet is populated by a human race of Meio's creation and design. A cabal made up of corrupt world leaders and criminals rule over the planet from the shadows in Meio's absence, while plotting for his return. They find the Grandmaster's burial chamber, deep beneath ancient ruins, and send in a team to release him from his tomb, led by the traitor Strider Hien, who has sabotaged the Striders and caused their demise. Meio is set free once again to rule the world from a rebuilt Third Moon, where he continues to perfect his human lifeforms.

In his absence, however, the world Meio built has felt apart. Meio returns to a world wrecked by wars and overrun with genetic defects and diseases, and his humanity has nearly driven itself to almost extinction. Faced with this scenario, Grandmaster Meio decides to destroy the planet and seek a new world to restart his experiments anew. In order to carry this out, Meio uses his powers to create a massive artificial lifeform known as Caduceus, a giant creature capable of carrying the seeds of his created life and travel through space as they search a new planet.

A single survivor of the Striders, a young agent carrying the same codename of the legendary Strider who defeated Meio 2000 years ago, surfaces to oppose his plans once again. Fighting against all his subordinates and followers, HIryu reaches the new Third Moon and single-handedly defeats both Meio and Caduceus. Defeated, Meio wonders aloud if this Hiryu is the same man who once stopped his plans in the past, but receives no answer as Hiryu drives his Cypher through him, bisecting the evil dictator. 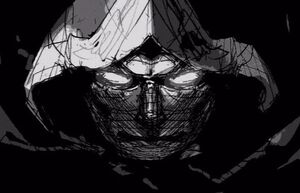