Head of the Sawyer Family

Drink the blood of his family's victims to live longer.

Earl Sawyer most commonly referred to as Grandpa Sawyer is the overarching antagonist of the Texas Chainsaw Massacre series. He is the grandfather of Drayton, Chop Top, Nubbins, and Leatherface and the patriarch and head of the Sawyer Family. He is extremely old and frail, but the family still thinks he is the best killer of them all. He at first appears to be a corpse and has the inability to talk. He, like the others, was fired from his job at the slaughterhouse when they started using the air-guns. He is the second most recurring character in the franchise after Leatherface.

Despite his extreme age and frailty the family hold him in great regard and want him to have the "honor" of killing their victim, putting her through an agonizing torture regime in which the stronger family members held her over a sink whilst Grandpa was given a small hammer which he continually dropped: eventually Drayton decided to help Grandpa out and hit the victim with the hammer, however before he could finish the job their base was raided by the vengeful brother of one of their former victims, who attacked them with a chainsaw.

He is portrayed by John Dugan, Ken Evert and Eduard Parsehyan.

Grandpa appears in the prequel film Leatherface as a much younger (but still elderly) man. His deadly efficiency is shown for the first time as despite being in his 90s, he’s able to effortlessly kill a thief with a single blow to the neck with a hammer during his grandson Jed’s (Leatherface) birthday. Decades later, when his family is finally reunited with Jed after he spent his childhood to early adulthood in a psychiatric hospital, Grandpa’s age finally started showing as he’s shown continuously napping through the climax and end of the film.

The 124-year-old Grandpa appears, initially thought to be already dead; he is first seen briefly during Leatherface's chase scene, Sally approaches him seeking help but assumes he is dead when she sees how old he is. Later after heroine Hardesty Sally Hardesty is captured by his grandchildren, Drayton, Leatherface, and the Hitchhiker, Grandpa is taken from the second floor of the house and brought to her by them. Leatherface proceeds to slash Sally's finger and forces it into Grandpa's mouth, so he can suck her blood (proving that he is, in fact, alive), an event that causes Sally to fall unconscious. Sometime after Sally is awakened, Drayton, Leatherface, and the Hitchhiker decide to allow Grandpa to end her life through the use of a hammer; due to his advanced age, Grandpa is largely incapable of using the hammer efficiently and continues to drop it. The hassle that ensues with Grandpa's continued dropping of the hammer and his grandchildren's over-eagerness to help him allows Sally to break free of the Sawyer family and jump out a window, though he and Drayton do not attempt to follow her.

Grandpa, now 137 years old, inhabiting an abandoned theme park named the "Texas Battle Land" with what remains of his family; when the film's heroine, Vanita "Stretch" Brock, is captured by his grandson Chop Top, Grandpa is brought forth to kill her (in the same way he tried to do to Sally) with help from Chop Top, unlike in the first film where he actually lands a hit though he succeeds in only causing a minor head wound to her with a sledgehammer (and a second wound caused by an impatient Drayton). When Lieutenant "Lefty" Enright, the film's male protagonist, engages in a chainsaw duel with Leatherface, Grandpa attempts to aid his grandson by throwing a hammer at his opponent, only to hit Leatherface instead and subsequently fall to the floor (which alludes the first film's climax). Grandpa apparently meets his demise when a grenade, set off by an injured Drayton, detonates in close proximity to him.

In this film, which has connections to The Texas Chain Saw Massacre and The Texas Chainsaw Massacre 2, Grandpa appears only as a decayed corpse kept and treated as if he were alive by Leatherface and his new extended family who regularly pour blood into his mouth to "feed" him; when one of the film's protagonists, Benny, opens fire on the Sawyer house with an automatic rifle, Grandpa's body takes several shots to the chest and one to the face, but the body is left for the most part intact. In this film, the character of Mama mentions that she castrated both herself and "Papa", referring to Grandpa, implying an incestuous relationship between the two.

Texas Chainsaw Massacre: The Next Generation

In the 1994 film Texas Chainsaw Massacre: The Next Generation, Grandpa appears as a member of the Sawyer (renamed to the Slaughter) family. His sole appearance in the film is of him being at the dinner table during the dinner scene in which he promptly left the table after Vilmer raged out and attacked William with a hammer. This time instead of being cannibals, the Slaughters are now shown enjoying eating pizza. The family are also under the employment of a secret society known as the Illuminati to spread fear and terror.

In Texas Chainsaw 3D, the events of the original take place just prior to the start of the film. Grandpa is shown still sitting in his chair he was sitting in the original still holding his hammer. This time instead of the Sawyers getting away with their killings, they are reported on by Alice, resulting in an officer being dispatched to their house. However, several other armed Sawyers managed to arrive at the house to reinforce it. As Grandpa was sitting in the background, the Sawyers and the officer negotiated and agreed to hand over Jed (Leatherface) in exchange for him getting a fair trial. But before Drayton could hand over Jed, an armed posse of the locals arrived. The posse then threw a molotov cocktail into the house, resulting in a brief shootout in which all the Sawyers save for Jed are mowed down including Grandpa (who is shot several times in the chest while still sitting on the chair). 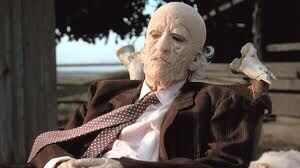 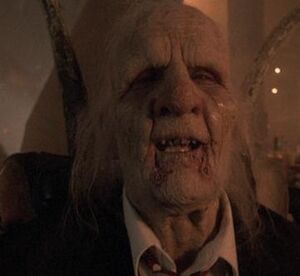 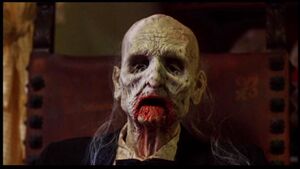 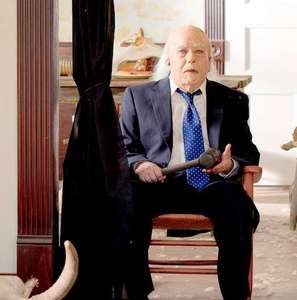 Grandpa Sawyer in the 3D Timeline. 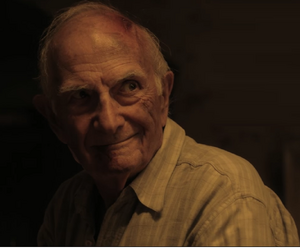 A younger Grandpa Sawyer in Leatherface.