Grant Grant is the main antagonist of the 2006 horror comedy film Slither. He is the husband of film's protagonist Starla and becomes the host for a parasitic alien life-form.

He is portrayed by Michael Rooker, who also played Henry in Portrait of a Serial Killer, Merle Dixon in The Walking Dead and Yondu Udonta in the Guardians of the Galaxy films.

Grant goes out to a bar where Grant notices something in the tall grass and discovers a large, maggot-like creature of alien origin. As he then locks Brenda away in a barn out in the woods where he feeds her the raw meat he's been gathering. As Starla catches on to his strange behavior and witnesses his new mutant appendages protruding from his torso, Grant then flees into the woods.

Three days later, the posse go inside to find Brenda after she has swollen to grotesque proportions as her body expands with thousands of small parasitic slugs. Shortly after, Bill, Starla, and MacReady avoid being infected as they keep their mouths shut to keep the slugs from entering.

Meanwhile, Grant sets about infecting and/or consuming all life in town. Starla is captured by Grant's zombified slaves and brought home where Grant is still being governed by his emotions and attempts to use it to her advantage, with Grant noticing what's happening. Bill then attempts to turn him into a breeder, and the volatile gas enters Grant's swollen body and Starla grabs Bill's gun, shooting a bloated area of Grant where the gas is collecting. The gunshot ignites the gas and Grant explodes in a shower of mutated meat. When Grant dies, all of the worms and infected townsfolk die as well. 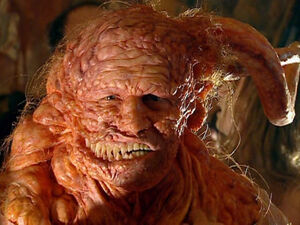 Grant reveals his true form.
Add a photo to this gallery
Retrieved from "https://villains.fandom.com/wiki/Grant_Grant?oldid=4108682"
Community content is available under CC-BY-SA unless otherwise noted.