NOTE: This article is about the incarnation of Ravager from the Arrowverse. The mainstream version can be found here: Ravager (Grant Wilson).

Suppressing the inhabitants of Star City

Destroy every resistance against his empire (failed)

Grant Wilson, known as Deathstroke, is the son of Slade Wilson in the TV series Legends of Tomorrow. When Rip Hunter's team travel to a potential future, they find out that Wilson brought an army to Star City and took over, destroying most of the city in the process.

He is portrayed by Jamie Andrew Cutler.

When Slade Wilson tries to find his son Joe Wilson, he eventually succeeds in doing so. However, Joe has become the leader of the mercenary organization whose members are known as "The Jackals" and turns hostile. During their argument, Joe reveals to Slade that unbeknownst to him, he has another son called Grant.

In around 2031, Grant adopted a similar costume and the alias of his father and became Deathstroke, gathering an army with which he invaded Star City during an event known as the Uprising. During the subsequent war, he and his forces killed the majority of Team Arrow, including John Diggle and Felicity Smoak, and gained control over the entire city. He also outed Oliver Queen as the Green Arrow, forcing him to go into hiding, but not before Grant cut off Oliver's left arm in a climactic battle in the middle of the city. Many of its residents were forced to flee or evacuate, and those that stayed formed roving street gangs that all followed Grant's command. Though he reigned supreme, Grant continued hunting the streets for the elusive Green Arrow, who continued to evade capture and fought against Grant's forces through guerrilla warfare tactics.

Arrival of the Legends

When Rip Hunter's team arrives at Star City in 2046, they find out that Oliver Queen is no longer the Green Arrow and is thought to be dead. Instead Connor Hawke, the son of John Diggle, took over the mantle. During a gang war in which the Green Arrow interferes, Sara sees Connor getting shot. Worried, the follows him into an alley. Shortly after, Wilson arrives in full armor and Sara believes him to be Slade until he takes off his mask and reveals himself to be Slade's son. Sara and Grant are about to fight but then a horde of Wilson's followers appear, causing Rip, Connor and Sara to flee.

He later enters the headquarter of a Star City gang that, unbeknownst to him, has been taken over by Mick Rory. He orders everyone out on the street to hunt down the Green Arrow, claiming that he wants him dead by morning. However, Rory coldly tells him that the gang will only take orders from Rory. Wilson responds that it might be Rory's gang but that it's Wilson's city. He then leaves and Rory's gang heads out to hunt down the Green Arrow, Rip and Sara Lance.

To escape from this future, Rip and his team enter a warehouse in which old technology from Palmer Tech is stored. There, they are ambushed by Grant's men. During the ambush, Connor is taken. Although Rip decides that they are not going after Connor, as this future is only potential, Sara later leaves the Waverider to save him.

With Connor captured, Wilson gathers the criminal remnants of Star City to witness the execution of Connor at the place he took the arm of Queen. Before he can decapitate Connor however, one of his masked criminals reveals that he took Sara captive. Oliver Queen, equipped with a mechanical arm, then attacks and Sara breaks free. Connor also frees himself and attacks Grant. He is eventually overpowered but Oliver shoots an arrow at Grant before he can kill Connor. He then continues Connor's fight with Grant while the rest of Rip's team appears and take down Grant's men. After this is done, Connor shoots a rope arrow at Grant, tying him up mid-fight. Oliver then strikes down Grant with his mechanical arm, knocking him out. 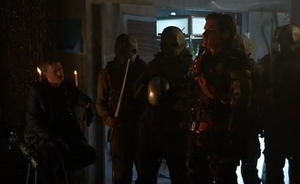 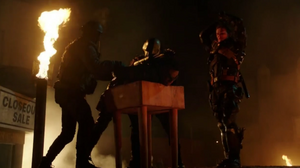 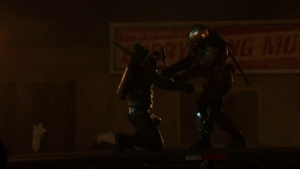 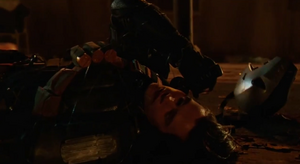