Monster
The Grasshopper Monster is the manifestation of an Evil Seed created by Kougane and a supporting antagonist in Kamen Rider Gaim.

Created by Kougane, the Grasshopper Monster crossed through dimensions thanks to a crack in space time and entered the mainstream world, where it attacked Kouta while he was searching for Takatora Kureshima and Mitsuzane Kureshima. After being fought off by Kouta, the Monster returned to the Soccer World where it fought Kaito Kumon. It later returned to the mainstream world and attacked Gaim again, only to be blasted away and to retreat back to the Soccer World, where it was destroyed by Kaito Kumon as Baron Lemon Energy Arms after he used his Lemon Energy to trap it before destroying it with a Cavalier Kick.

The grasshoppers that made up the Grasshopper Monster were later used by Kougane to possess and gather people in the Soccer World in the Kamen Rider Gaim summer movie. 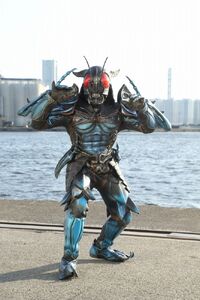