Resting
Thinking about his past
Training Imaginators

Grave Clobber is one of the trappable villains in the game Skylanders: Trap Team. A Earth element trap is required to trap him.

Grave Clobber was one of eight pharaohs charged with ruling over a great kingdom (that's actually the Golden Desert the Golden Queen takes over). His seven brothers trapped Grave Clobber in an underwater tomb and left him to die. The other siblings fought and eventually destroyed their kingdom attempting to rule it. Grave Clobber somehow came back as a large stone mummy and tracked down his brothers and "clobbered" each of them (and presumably killed them). The Golden Queen eventually found Grave Clobber and tasked him with defending her new kingdom.

Golden Queen summoned Grave Clobber to help her defeat the Skylanders in the Golden Desert level of the game. During the arena battle of the level, he is summoned to fight the Skylanders. But in the end he is defeated and trapped.

Grave Clobber is one of several playable villains in the card game.

Grave Clobber was eventually redeemed by Eon and (somehow) changed his element of Earth to Water. He becomes a Skylander Sensei of the Brawler Class. 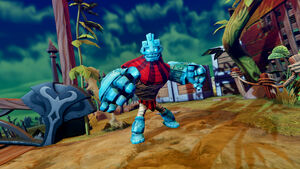 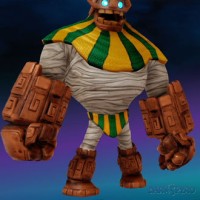 Retrieved from "https://villains.fandom.com/wiki/Grave_Clobber?oldid=3377352"
Community content is available under CC-BY-SA unless otherwise noted.