Lord of the Dead

Continue the spread of Death and Disease (failed).
Keep the Age of Fire going.

Gravelord Nito, also known as the First of the Dead, is a powerful god to the people of Anor Londo and a major antagonist in the 2011 videogame Dark Souls.

Long ago, during the Age of Ancients, the world was unformed, with no light or dark, no life or death. All that existed were the Everlasting Dragons, and the Archtrees they called their homes. At some point, a fire came into being in the bowels of the Earth, known as the First Flame. The flame brought disparity; life and death, light and dark. At some point, humanoid beings came into existence, and drawn to the flame, four of them found great souls of lords in the fire. Nito found one of the Lord Souls, the Death Soul, which he used to strike down the dragons with a miasma of death and disease as well as imposing the very concept of death onto the world.

Along with his fellow lords, and a host of other gods and warriors, Gwyn made war against the Everlasting Dragons above. When one of the dragons' own, Seath the Scaleless, betrayed their secret weakness, Gwyn and his lords were able to defeat the dragons, and make the world their own, thus beginning the Age of Fire. While Gwyn and the Witch of Izaleth set off to rule and be worshiped as gods, Nito instead went back deep into the catacombs where he then sleeps in eternal slumber.

Travelers who are brave enough to find their way into his tomb can pay their respects and become a Gravelord Servant.

In time before the player's mention, Pinwheel stole the power of Nito, holding on to it until the Chosen Undead meets the Pinwheel. This power was also sought after by Occultists who wished to destroy the other lords using the power of Nito. These events are considered ancient history that fall in a timeline between the fall of Oolacile and the Chosen Undead's arrival.

A long time after Nito's death, the fire was linked and faded again many times, and the land of Lordran that Gwyn had once ruled saw the rise and fall of countless kingdoms.

However, Nito's powerful soul would remain, and he would be reborn time and time again. Deep in the Black Gulch, a monstrous amalgamated created from the undead trapped within called The Rotten came into possession of the Old Dead One Soul, exerting Nito's power of death and disease just as the old god did.

Nito is arguably the least human-like god in Dark Souls. His body is a large skeleton that is covered in a group of smaller skeletons lumped together, mildly obscured by a large black fur coat. He possesses a massive scythe-like blade from his right arm. 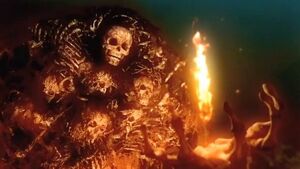 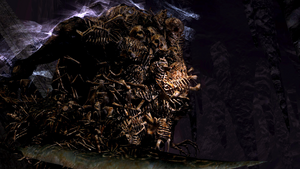 Nito awakening from his coffin. 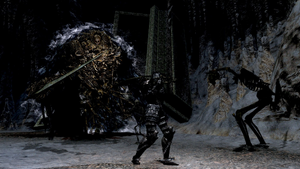 Nito and his skeletons battling the Chosen Undead. 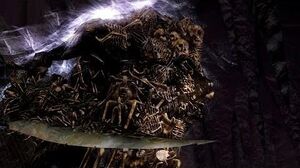 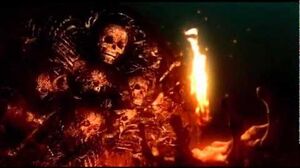