Villains Wiki
Register
Don't have an account?
Sign In
Advertisement
in: Mature, Parasite, Evil Vs. Evil,
and 47 more

Commands the Flood through a hive-mind mentality

Ability to use a "logic plague", which is capable of converting an AI to his cause via an endless stream of logical arguments that eventually overwhelms the AI and convinces it that the Flood is right

Assimilate all life in the Milky Way Galaxy.

Exact the Precursors' revenge on the Forerunners and all other sentient beings.

The Gravemind is one of the two main antagonists (alongside the Prophet of Truth) of the original Halo trilogy. It is a parasitic hive-mind intelligence and the leader of The Flood. The Gravemind is a collection of the sentience and knowledge that has been gathered by the victims of the Flood.

The Gravemind makes his first appearance halfway through Halo 2's campaign. Using his tentacles to save the Master Chief and Arbiter from perishing, Gravemind brings them face to face in a chasm on Delta Halo. Gravemind reveals to the Arbiter that the ring's architects, the Forerunners, died when they activated the installation in order to stop the threat of the Flood; the Master Chief verifies what the creature says, having stopped the firing of another ring in Halo: Combat Evolved.

Though the Arbiter does not accept the truth immediately, Gravemind sends the Master Chief to the Covenant city High Charity and the Arbiter to the Halo's control room in order to stop the deluded Covenant from killing all sentient life a second time. Though he promises an alliance, Gravemind has ulterior motives. His Flood infest the human ship In Amber Clad and makes a slipspace jump into High Charity itself, in an effort to use the station to escape the confines of Halo.Having taken over the city, Gravemind questions the A.I. Cortana, who was left behind to destroy High Charity if Halo was activated. Gravemind says that he has questions that he will ask, and Cortana agrees to answer them.

Later, after torturing Cortana to learn what she knows, the Gravemind finishes assimilating High Chairty, turning the Covenant City into a massive Flood Hive. It begins to plan its next move, invading Earth, sending a infested Covenant ship out after breaking through the quarentine the Elites had set up around High Charity.

After learning that its attack had failed, also realizing from the information it had extracted from Cortana that the Prophet of Truth was heading for the Ark, a Forerunner world that could activate all of the Halo arrays, the Gravemind slipspace jumps to the Ark, the super-hive that had been High Charity crashing into its surface before quickly spreading the Floods infection outward.

When it became apparent that Truth was on the verge of activating the Halo rings, the Gravemind made the startling choice to ally itself with the Chief and Arbiter, fighting by their side in their assault of the control room. However, once the threat was averted, the rings deactivated and Truth was killed by the Arbiter, the Gravemind turned against them, laughing maniacally while proclaiming in a sinister tone, ¨Now the gate had been unlatched, headstones pushed aside! Corpses shift and offer room, a fate you must abide!¨ To this, the Arbiter comments, ¨We trade one villain for another¨

Afterwards, despite the Chief injuring it by overloading the reactor of High Charity, the Gravemind launches all of its forces against him and the Arbiter, trying and failing to stop them from reaching the Control Room to the Halo. Seemingly accepting its fate once it realizes the Halo is about to fire, the Gravemind laments openly how its defeat was simply adding to the punishment imposed onto it by its enemies.

The Halo then fires, the blast tearing the installation and the Ark apart, destroying all traces of the Gravemind, at least for the time being. 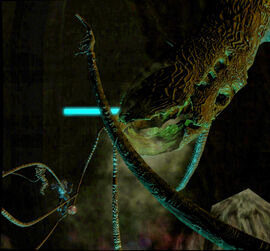 Gravemind talking to John-117 and Thel-Vadam.