Gravity Man is a Robot Master from the Mega Man series. He was built by Dr. Wily to defeat Mega Man. He debuted in Mega Man 5. Gravity Man has the power to control gravity using his special weapon, the Gravity Hold. His only attacking weapon is a buster, but his Gravity Hold allows him to hold his target in place (though he never does it during his boss battle). His weakness is the Star Crash.

Gravity Man is a genius and enjoys researching gravity, which he does in his spare time. However, he is anti-social and would rather research alone than in a group. He loves physics but hates outer space because there is little to no gravity there.

Gravity Man is one of the 8 Robot Masters created by Dr. Wily in Mega Man 5 to try take over the world again. In his battle, he is constantly shifting gravity up and down, back and forth. When he is defeated, Mega Man gains the Gravity Hold. Due to his ability to keep Mega Man on the ceiling when he is on the ground and vice versa, Gravity Man is immune to the Charge Kick.

Gravity Man makes a cameo as a CD data card in this game.

Gravity Man appears in Super Smash Bros. Ultimate as a master spirit. His dojo makes the spirit who learns his style have a major increase in jump height, but a major decrease in speed and fall speed. In his World of Light only spirit battle, you fight Dark Samus on the Mario Galaxy stage. The fight is a stamina match, where both and after a bit of time, both fighters have reduced jump height and gravity may become suddenly increased or decreased. The theme of his stage also receives a remix here.

Gravity Man appears in the Worlds Colide event with Sonic the Hedgehog. He is part of the robot master army assembled by Dr Wily and Dr. Eggman to defeat Sonic, Mega Man and their allies. 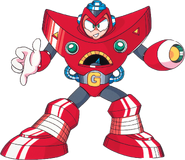