Gray the Ninelives is one of the villains in the manga and anime Trigun. He is a member of the Gung-Ho-Guns.

Gray the Ninelives is a very large man known for being indestructible. He is one of the Gung-ho-Guns sent to attack Vash's home.

In the manga, he is sent along with Leonof the Puppet-Master. Having received reports that Wolfwood, known secretly as Nicholas the Chapel of the Gung-ho-Guns, was traveling with Vash and killed Rai-Dei the Blade, Gray attacks Wolfwood, accusing him of being a traitor. He wields two large gauntlets with built in grenade-launchers. He proves nearly indestructible, easily shrugging off continuous machine gun fire from Wolfwo od's Punisher gun. Wolfwood eventually blasts Gray with a rocket, and discovers Grey is actually formed from nine dwarfs controlling a bio-mechanical suit from the inside, allowing them to keep fighting until all nine are dead. Wolfwood kills all but two of the dwarves, who are captured. They briefly escape to fight one last rampage, but are disarmed and stopped by Vash. The two dwarves later turn over their coin to Meryl and Milly, hinting at the absolute necessity that Vash collect them all if he is to face Legato.

The anime version, Gray is a cyborg whose only remaining human part is his brain, which is deeply encased in armor. He doesn't talk. Nicholas D. Wolfwood kills him after using acid to melt the armor off enough to attack the brain. 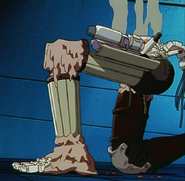 Gray in the manga

Add a photo to this gallery
Retrieved from "https://villains.fandom.com/wiki/Gray_the_Ninelives?oldid=4275399"
Community content is available under CC-BY-SA unless otherwise noted.