Captain (by the Road Pirates)

Leader of the Road Pirates

Rule Hot Wheels City (failed and was imprisoned due to Scurvy's foolishness).

Greasebeard is the main antagonist of the 2015 full-length animated film Team Hot Wheels: Build the Epic Race. He is the ruthless mercenary who is the opprobrious leader of the Road Pirates, a bloodthirsty group of thieving and greedy criminals.

He was voiced by Doug Erholtz.

While Team Hot Wheels was out building their Epic Race, a tour bus is driving its way towards Hot Wheels City, where Greasebeard was staring at it through his telescope. He ordered his men to pillage the bus, frightening the passengers. As they began to raid it, Greasebeard was about to introduce himself until Scurvey butted in, telling the people who he is, annoying Greasebeard and inciting him to smack Scurvey upside the head with his wrench hand. Greasebeard then orders the passengers to hand over their belongings to his monkey, Swab. As one of the passengers asked Greasebeard why they are doing this, Greasebeard explains to him that stealing treasure is what pirates do. Just then, Scurvey alerts Greasebeard to look outside. Greasebeard smacks Scurvey upside the head again and looks through his telescope to see Team Hot Wheels driving in Rev. Upon seeing that, Greasebeard devises a plan until Scurvey butts in again, saying that they could be unstoppable by using Rev to power their pirate ship. Greasebeard smacks him a third time, informing him that he already knows that. He then orders his men to follow Team Hot Wheels.

As they were led to Larry's garage by Team Hot Wheels, Greasebeard believed there was a secret entrance inside. As the Road Pirates investigated the area for a lever that leads to Larry's lab, they had no luck of finding it, until Scurvey leans on a wall, revealing a secret elevator. Greasebeard then congratulated Scurvey by giving him a noogie.

As the Road Pirates went down the elevator, they screamed in terror from the trip down. The elevator doors then opened, and the Road Pirates were amazed to see Larry's technology. Greasebeard orders his team to focus, as he believed Rev was inside a giant vault in front of them. He first ordered Grog to open it. Grog bit onto a bolt, but broke his teeth. Greasebeard then ordered Tankard to use his head. As Tankard charged at it, he became dazed. Greaesbeard asked him how many fingers he's holding up to which Tankard replied by saying "w". Greasebeard said close enough and resorted to Longshanks. Longshanks rolled a bomb at the vault like a bowling ball, which resulted in the Road Pirates covered in soot. The vault finally opened after that. Longshanks believed he opened it, but Greasebeard pointed out it wasn't him and ordered his crew to hide, as the vault was actually opening from the inside. After seeing Larry walk away with the key to the vault containing Rev, Greasebeard devises a way to split Team Hot Wheels to acquire the key, as he was then staring at Larry's treasure box of disguise.

While making their way to the epic race press conference, Greasebeard was in disguise of a pink dress and suddenly told a policewoman to watch it after he bumped into her. The policewoman said excuse me in disgust, making Greasebeard to tell her that he is a mother with two children and a camel. Once the epic race press conference started, Wyatt was causing mass destruction, in which Team Hot Wheels berated him that a monkey could do his part. After hearing that, the Road Pirates advises Swab to take his place. After Team Hot Wheels saw Swab driving around in Wyatt's car, they become impressed with his driving and allowed him to take Wyatt's place. Greasebeard was soon pleased to see his plan going into play.

Soon afterward, Greasebeard ordered the Road Pirates to cause mass destruction to Hot Wheels City to lead Team Hot Wheels away, while he and Scurvey bagged Larry to take the key to the vault away from him, in which he then succeeded and stole Rev.

Greasebeard appeared before Team Hot Wheels on his pirate ship and has not only revealed Rev to them, but also Wyatt as his captive. Gage demanded Greasebeard to let him go, but Greasebeard said it was no fun and decided to feed Wyatt to robotic sharks until Rhett called out a death duel, much to the pirates shock. Rhett informed Gage that pirates cannot refuse a challenge because of their code of conduct. Greasebeard suggested a sword fight, but Gage suggested a race instead, as he offered him Hot Wheels City if he wins. Greasebeard accepted it.

Before the epic race started, Greasebeard said he'll win it by having Wyatt as his hostage to prevent anyone from touching his vehicle. Just then, a female driver wished him good luck, inciting Greasebeard throw a knife at her tires, causing it to deflate.

Once the epic race started, the racers drove up a volcano and down a steep road. Greasebeard shouted "Thar I blow!", as he went down the side of the volcano. He later then bashed into Gage's car, as he drove past him, in which Gage told him to stop cheating. Greasebeard then grabbed a handful of spikes and threw them onto the road behind him. Greasebeard later ordered his crew to activate their wheel spikes, as they drove over a slippery chemical on the race track. As he and the Road Pirates drove past a giant squid, he ordered Tankard to shoot a squid on top of another racer's car, causing him to crash into other cars and knocking them off the race track, in order to force Team Hot Wheels to save them. Greasebeard showed Wyatt Team Wheels saving those people through his telescope, encouraging him to take a place by his side. Wyatt seemingly agreed, allowing Greasebeard to free him. Just then, however, Wyatt removed a screw that separated his sidecar from Greasebeard's vehicle, shocking Greasebeard, as Wyatt shouted that he'll never join him.

He and the Road Pirates were about to make it to the finish line until Team Hot Wheels (united with Wyatt) were gaining on them. Greasebeard, however, had one more trick on his sleeve; he ordered Swab to detonate Team Hot Wheel's vehicles, making him feel sorry about himself. Just as Greasebeard was about to cross the finish line, Larry appeared, along with Granny Gram in her vehicle, and drove away with the finish line. At first Candy Gram and Larry believed they had lost the Road Pirates, but they suddenly appeared on their mothership, firing cannonballs at them. As Greasebeard drove after them, he unvealed his plan to turn Hot Wheels City into gold. Greasebeard then tells Swab, who was sitting on his shoulder and feeling bad after betraying Team Hot Wheels, to cheer up after telling him that monkeys can't have any friends. Meanwhile, as Scurvey was taking a bath in the ship's crows nest filled with treasure, he became shocked to Team Hot Wheels driving after them in new vehicles, alerting Greasebeard about how cool their new vehicles are, to which Greasebeard asked him "Really cool, you say?".

Just as Scurvey was about to open fire at Rhett, Swab decided to turn over a new leaf and attacked Scurvey. Greasebeard ordered Scurvey to skewer Swab, to which Scurvey oblidged by grabbing a sword. However, Swab kicked him in the face and used his sword to defeat the Road Pirates with ease. Just then, Greasebeard choke hold him with his wrench hand and threatened to dine on monkey stew. Gage quickly drove onto the pirate's ship and shot doubloons at the pirates, allowing Swab to escape from Greasebeard's grasp and escape with Gage. Greasebeard, now angered, ordered his men to man their cannons and focus their fire on Gage. Right before Greasebeard could give the word, he started to smell something burning. He turned around in shock to see the ship's mast burning, accidently crying out fire. This foolishly made Scurvey order the pirates to point their cannons at Greasebeard. Greasebeard ordered them to stop, but it was too late. The Road Pirate's ship exploded and the Road Pirates landed at Hot Wheel's city prison in separate jail cells. Greasebeard called Scurvey a lowly dog, before strangling with his wrench hand and wishing that he was never born.

As the captain of the Road Pirates, Greasebeard is known for ordering them around. He is very tough, arrogant and competitive, so he would stop at nothing from taking over the city. However, he is also shown to be an extremely vituperative, uncomplimentary, argumentative and opprobrious brute towards his crew as Scurvey butted him in, annoying the Road Pirates and making them look bad, thus making Greasebeard abuse him. As a pirate, Greasebeard is also extremely acquisitive, unscrupulous, and materialistic, so he loves to steal treasure as a passenger on a bus they were attacking asked him why they were doing it. Greasebeard is also very traitorous and greedy, as he kidnapped Wyatt to use him as a hostage while driving in the epic race. He actually tries to convince Wyatt to join him during the epic race, showing that he would let anyone join him for losing on the hero side. However, as Wyatt agreed, it was just a rouse for Greasebeard to free him. It was also showed that he cares for nobody else as he and the Road Pirates attacked Larry and Candy Gram for taking the finish line. He also hates losing and had a bad temper as Scurvey mistakenly ordered the crew to fire, causing their ship to blow up, thus sending them to Hot Wheel City's prison. He is also very reproachful, insulting, abusive, censorious, objectionable and blameworthy, so he would even abuse animals after the way Swab betrayed the Road Pirates and joined Team Hot Wheels.

Greasebeard is a slender, strong, muscular man with dark brown hair, sideburns, and a beard. He wears a white shirt, a black leather jacket with a red interior, a black eyepatch, and black boots. He has a golden monkey wrench for a hand and a long black mullet. He also has several tattoos on his chest.

As a pirate, Greasebeard is very skilled, competent and resourceful at terrorizing people and stealing the treasure. With their mother ship, they attack buses and other smaller vehicles. Sometimes, Greasebeard uses his wrench hand to fight and hold his victims in a death grip. During the epic race press conference, he and his crew were good at disguises. He even broke up Team Hot Wheels as he sent Swab to take Wyatt's place. He is a very tough and influential driver, although he and his crew cheated as they caused havoc in the epic race.

Greasebeard has his own personal vehicle called the Greaserod, which resembles a cannon. It once had a sidecar to hold Wyatt hostage during the epic race. 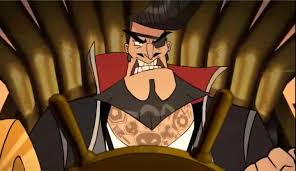 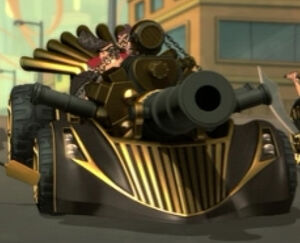 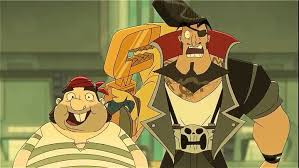 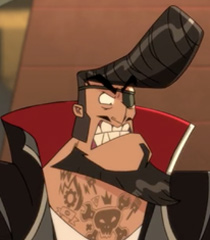 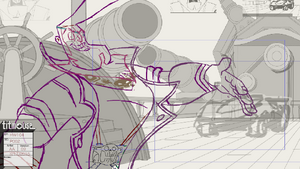 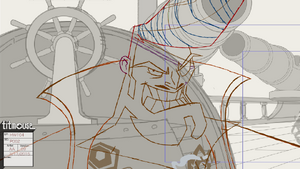 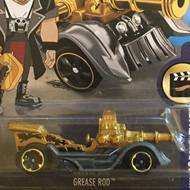 Toy version of his car.
Add a photo to this gallery
Retrieved from "https://villains.fandom.com/wiki/Greasebeard?oldid=3889608"
Community content is available under CC-BY-SA unless otherwise noted.