Transform the Zenkaiger's dimension into a world of boxing.

He was voiced by Shunichi Maki, who also voiced the Boxing World.

The Great Boxig World made its first appearance after the death of the original Boxing World, where it summoned boxing rings all over the city, prompting the team to bring Zenkai Oh JuraGaon to battle the robotic dinosaur in a boxing match. However, he told them that using a sword in a boxing match is against the rules which they agreed, but this bought him long enough to deliver a sneak attack right to him. However, Vroon wanted to join in the fight as he transformed into a giant dump truck as he destroyed the mat that both the megazord and the Great Boxing World fought on.

Thankfully, the Great Boxing World summoned another Kudaitest to hold down Vroon while the boxing match begian without any interruptions as he gave a beating on the mecha itself. Thankfully, Magine transformed herself into a dragon and then with the help from Kaito, both Magine and Vroon combined for the first time as ZenkaiOh VrooMagine, making this boxing match an even fight. With this and a larger arena, they managed to fight against the Kudaitest while JuraGaon fought against the Great Boxing World on his own mat.

Some time later, the Kudaitest was given a dose of electricity from the mecha and then a beating from ZenkaiOh VrooGaon, sending the robot out of the ring as it was then destroyed, leaving the Great Boxing World left to defend himself. After that, he was then destroyed by Vroon Picker Accel Strike, thus freeing the Boxingtopia from the Tojiru Gear.

The Great Boxing World was later respawned by the Great Recycle World alongside the Great Mushroom World, Great Ice World and Great Sushi World. It was destroyed again by Twokaizer in TwoKaiOh. 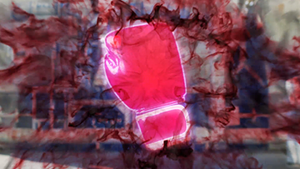