Personification of Evil and Darkness

Get answers to its existence from the Presence.

Destroy Heaven, Hell, Apokolips, and the omniverse (both ongoing).

The Great Darkness was the personification, source, and cause of all evil ever to exist. Having existed before the creation of the Greater Omniverse, it functioned as an antithesis to God Himself and sought only to snuff out the light of creation. Beings of evil such as Darkseid, Mister Mind, Superboy-Prime, and the Anti-Monitor were all direct or indirect creations of the Great Darkness.

The Great Darkness was formed when God uttered the words "Let There Be Light" and came to embody all the darkness in creation, as well as everything that opposed the light of the Presence, which is the DC universe's version of God. However, despite its immense power, the Great Darkness was still a newborn entity and lacked knowledge, and thus was easily defeated by the Presence and contained within its own realm.

When the events of Crisis on Infinite Earths took place, a group of mystics named the Brujeria attempted an occult ritual designed to contact the Great Darkness, but it went horribly wrong and the entity awoke as a furious beast, unable to grasp its power and becoming confused as to its existence.

Along the way, the Great Darkness decimated anything that got in its way and was so powerful that Lucifer Morningstar, Azrael, and Beelzebub formed an alliance to defend themselves should the Great Darkness decide to attack Hell as well. Somewhat ironically, another batch of demons known as the Demons Three decided to do the opposite and allied with the Great Darkness, seeing it as the ultimate sin and evil, which it technically was.

Finally, Swamp Thing, readied by his journeys into the Parliament of Trees and his dealings with John Constantine, sought the entity out of his own free will, whereas all other beings had been engulfed after being soundly defeated. The entity listened as Swamp Thing gave what little lessons he had that implied that darkness was in its own way as necessary as light, and had a place in the cosmos after all. It told Swamp Thing to leave him in peace, as he had entered, and prepared for what it called "a great and final ending".

However, as the Great Darkness stormed the gates of Heaven itself, the entity extended its hand, and much to the surprise of everyone, the Presence did likewise. This climaxed in the two beings merging together into the perfect balance.

The battle was not without its price. Doctor Fate killed one of the Demons Three. On the more heroic side, Golden Age magical hero Zatara sacrificed his life to save his daughter Zatanna, and Sargon The Sorcerer also met his end. John Constantine lost some of his oldest friends in the campaign to stop the Brujeria, while his ally Mento (Steve Dayton, formerly of The Doom Patrol and an ally to The Teen Titans) glimpsed the smallest portion of the Great Darkness and went insane, actually becoming a villain for several years.

In later issues showing the afterlife in Swamp Thing, he would glimpse the joined hands of the darkness and the Presence. However, this was not actually the end of the entity, despite many fans mistaking it to be so. The Great Darkness lives on, an unfathomable power beyond the spheres of DC cosmology that empowers such monsters as the Upside Down Man, Empty Hand, etc. In this sense, the Great Darkness can truly be considered the ultimate antagonist of DC lore.

The Great Darkness is an omnipotent being. It seems that the only being that was above it in power was God himself, and it is implied that the Great Darkness was God's dark half. While many believed it to have either redeemed itself or vanished after merging with the Presence, this has since been proven to be incorrect.

Only a small part of a much larger threat was merged with the Presence, and the true Great Darkness is still very active, yet never seen. However, its many agents are currently very active. 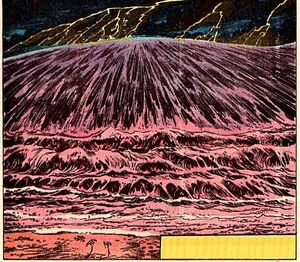 The Great Darkness as a cosmic wave of darkness. 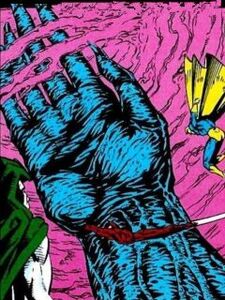 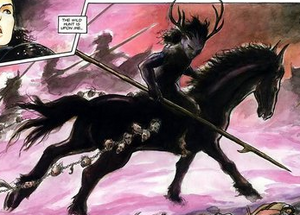 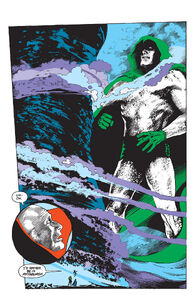 The Great Darkness fighting with the Spectre. 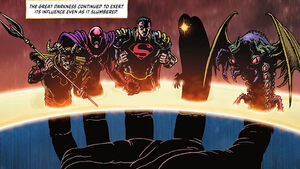 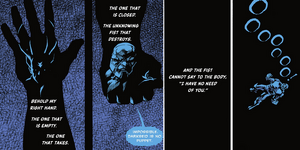 The Great Darkness opening a portal to the Otherplace. 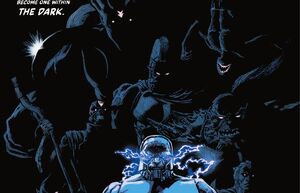 The Great Darkness with numerous other DC villains.

The Great Darkness in "Justice League #75". 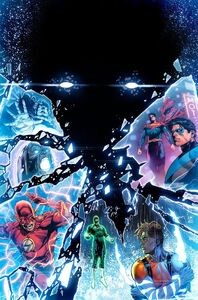 The Great Darkness in a teaser image of Dark Crisis.