Transform the Zenkaiger's dimension into a world of garbage.

He was voiced by Keiji Himeno, who also voiced the Garbage World.

The Great Garbage World made his first appearance as he began to pollute the city once again, but this time, with giant pieces of garbage, prompting the Zenkaigers to bring out ZenkaiOh JuraGaon and VrooMagine to battle him.

He used the Dustome to fire a garbage blast at the two mechas, but JuraGaon deflected the attack with his shield before the Great Garbage World used his dust chute as he chucks a couple of giant trash bins at the mechas. This manages to land on the mecha's head, blocking their line of sight, and if that wasn't enough he used this ability on the garbage itself in order to bury the mecha in filth. However, thanks to Magine's magic, the giant garbage was easily recycled.

After that, he was then destroyed by the Vroon Picker Accel Strike technique, thus freeing Gomitopia from the Tojiru Gear. 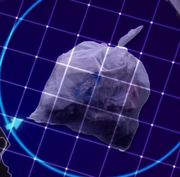