The Great Gorilla is one of the minor antagonists in Kung Fu Panda: The Game. He is a large mountain gorilla who was banished from the mountains for an unknown reason.

He was voiced by Phil Morris.

The Great Gorilla and his gorilla minions were hired by Tai Lung to destroy Po.

He throws boulders at Po, and then he escapes when the player reaches him. Master Shifu is then briefly assigned to stop the gorilla army from destroying the temple and find the Kung Fu Relics.

Later, Po finds Great Gorilla and his henchmen and fights them. Eventually, after a fight between Po and Great Gorilla, he was defeated by Po; he falls to the ground and his eyes roll into the back of his head.

The Great Gorilla is shown to be an extremely violent and aggressive animal who shows that he really didn't have any respect for kung fu (as mentioned by Master Shifu in the game), unlike Po.

Great Gorilla appears to have no kung fu skills, as he does little but throw boulders and use his heavy fists in battle.

Great Gorilla wears a red loincloth, a dark brown belt, and sparse armor, relying on his thick skin for defense. 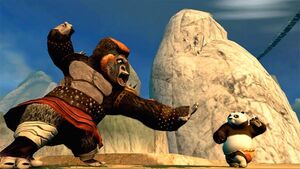 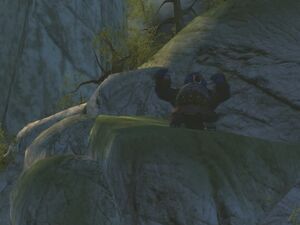 The Great Gorilla pounding his chest before fighting Po. 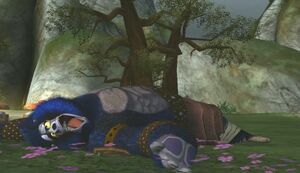 The Great Gorilla defeated by Po.