Transform the Zenkaiger's dimension into a world of ice.

The Great Ice World made its first appearance after the destruction of the Ice World, and much like the first Kudaitest, it too steped on a Tojiru Gear, gaining both the personality and ability as the Ice World and prompting the initial team to bring out ZenkaiOh JuraGaon to battle this freezing dinosaur. However, due to the area being all frozen, they won't get any traction. Thankfully, Magine came to the aid as she transformed herself into a dragon. The Great Ice World try to shoot it down, but she'd easily dodges and transformed the ice beam into a snow cone.

After Kaito combines both Juran and Magine into a flying megazord known as ZenkaiOh JuraMagine for the first time, they weaken the ice that surrounds the Great Ice World and then back to JuraGaon to take this matter in their own hands, and with a bit of magic Magine used some of her magic and as she trapped the Great Ice World in a snow cone. After that, he was then destroyed by Juran Sword Full Moon Crush, thus freeing the Kooritopia from the Tojiru Gear.

The Great Ice World was later respawned by the Great Recycle World alongside the Great Mushroom World, Great Boxing World and Great Sushi World. It was destroyed again by Twokaizer in TwoKaiOh.

This Kudaitest originally had the same base personality as the rest of its kind, but after becoming a Great World, it behaved much more like Ice World, though with a more obsessive attitude. 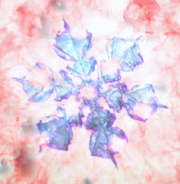