Deploying Destron Inhumanoids to cause havoc

Defeat V3 and conquer the world.

The Great Leader of Destron is the leader of the criminal organization Destron and the main antagonist of Kamen Rider V3. He is the second incarnation of the original Great Leader. He remained hidden for most of the series before being revealed to be a living skeleton with a beating heart, calling himself the God of Death.

As with the Great Leader of Shocker, the Destron Leader was voiced by the late Goro Naya.

The Great Leader of Destron emerged following the destruction of Gel-Shocker, gathering together the remnants of it to form a new, more powerful terrorist organization - Destron.

At some point, the Great Leader came across Joji Yuki, a brilliant young man who was about to commit suicide, and took him in, conditioning the young man to see him as a father figure and appointing him head of Destron's science division, making him believe that his scientific knowledge would be used for good.

After Shiro Kazami and his family took in Junko Tama, a woman fleeing from Destron, the Great Leader sent Destron Inhumanoids to kill her and Shiro's family, but Shiro and Junko managed to escape while the Kazami family were tragically killed by Scissors Jaguar. The Double Riders later stormed a Destron base looking for clues on the origins of the evil organzation, only to find it abandoned. Suddenly, the speaker in the room lit up and the Great Leader revealed himself to the Double Riders. Proclaiming that he had founded the ultimate organization to conquer the world, the Great Leader incapacitated the Riders with a special gas designed to clog up their cybernetics. However, Shiro Kazami then entered the room and pushed the Kamen Riders out of the way of the gas spray, saving them at the cost of being critically injured. Shiro was later remodeled into a cyborg by the Double Riders was and became Kamen Rider V3 to fight against Destron and avenge his family.

The Great Leader initially commanded the Japanese Division directly, but after the continued failures of the Mechanical Army to defeat V3, the Great Leader summoned Doktor G to oversee it and the Destron Japanese Branch. After Doktor G's continued failures to defeat the Riders, he would be succeeded by Baron Fang, Archbishop Wing and eventually the high-ranking Destron warlord, Marshal Armor

In the last few episodes, the Great Leader arrived in person to oversee the Japan Branch. At one point, Shiro and Joji uncovered his location and went to go capture him. V3 managed to corner the Great Leader, but at the last moment he was saved by Joji Yuki, who was still loyal to the Great Leader in spite of being cast out of Destron. After escaping, the Great Leader and Marshal Armor began a plot to destroy all of Tokyo with a Plutonium warhead. However, Riderman was able to get on board the missile before it launched and, as an act of redemption for allowing the Destron Leader to escape, steered it away from Tokyo and into the atmosphere where it could safely detonate, seemingly perishing in its destruction.

In the final episode, with the loss of their plutonium rocket, the Destron Leader orders the commencement of "Operation D", an all out attack by Destron's forces to destroy their enemies and make a final attempt to conquer Japan. After Marshal Armor was defeated by V3 and fled from battle, the Great Leader executed him for acting cowardly. Kamen Rider V3 then came upon his location and managed to corner him inside Destron's secret headquarters. After V3 pulls off his hood, the Destron Leader reveals himself to be a living skeleton with a beating heart, declaring himself a Shinigami (or "God of Death"). Taking notice of his heart, V3 knocks his head and arm off before tearing out the heart and tossing it to the ground, causing it to start bleeding out. However, V3 suddenly hears the Destron Leader's voice and cracks his skull open to reveal a tape player with a recorded message from the Great Leader. In the message, the Great Leader congratulates Shiro for uncovering his true form but announces that V3 will perish there with them as the base's self destruct sequence activates. Shiro manages to escape the base, but is left with the lingering suspicion that, in spite of Destron's destruction, the Great Leader still exists. 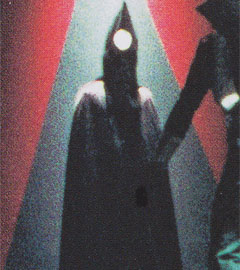 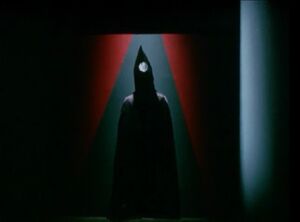 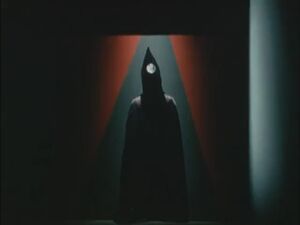 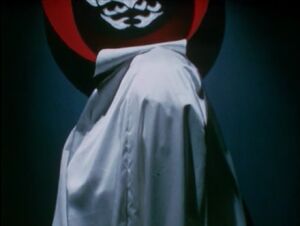 The Great Leader's physical form is uncovered by V3.

The Great Leader of Destron's true form, the "God of Death". 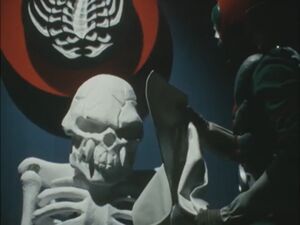 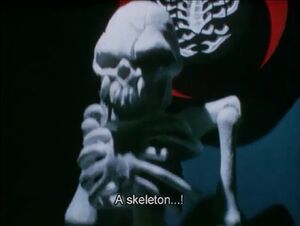