Commanding terrorist attacks across the globe.

Conquer the world with an army of kaijin.

He was originally voiced by the late Gorō Naya in all of his appearances and incarnations, who is also known for voicing Inspector Zenigata in the Lupin III anime series. He is currently voiced by Tomokazu Seki, who also voiced Rob Lucci in One Piece, and Gilgamesh in Fate: Type-Moon franchise.

He initially issued orders to his subordinates via speakers on Shocker's bases. After the two Kamen Riders, Hongo and Ichimonji, eliminated several of Shocker's executive members, Colonel Zol, Doctor Shinigami and Ambassador Hell, the Great Leader deemed the lower levels of Shocker unfit and sought to restructure the organization from the ground up. He secretly forged an alliance with General Black of Geldam and merged Shocker and Geldam to create a new organization, Gel-Shocker.

His last incarnation to appear in the Showa series was the Generalissimo of the Badan Empire, who made appeared to the ten veteran Kamen Riders after Ambassador Darkness's death.

The Great Leader may have also been the Grand Lord Crisis of the Crisis Empire, as they share the same voice actor.

For the more information on the Great Leader's Decade Incarnation, see here.

The Great Leader makes a return in the movie OOO, Den-O, All Riders: Let's Go Kamen Riders as the film's main antagonist. During a small conflict between the characters of Kamen Riders OOO and Den-O during their time travel in Japan during the 1970s while hunting the Imagins, General Black discovered a Cell Medal that was accidentally dropped by Ankh during the conflict and given to the Great Leader. The Great Leader combined it with the Shocker medal, creating Shocker's most powerful kaijin, Shocker Greeed. Shocker Greeed later defeated both Hongo and Ichimonji, allowing Shocker to create an alternate timeline where the conquered the world. Various evil organizations that had existed in the normal timeline were annexed into Shocker, with their highest members serving as part of Shocker's high council. Shocker also brainwashed Hongo and Ichimonji to become members of the organization.

OOO and Den-O returned to 1970s Japan in hopes of stopping Shocker Greeed from being created and returning the timeline back to normal. The Great Leader was confronted by the Riders, but was able to create Shocker Greeed and the kaijin manage to take down the Riders. Having failed to restore the timeline and the DenLiner destroyed, the Riders retreated back to the Shocker-ruled future and decided to confront Shocker, but were overwhelmed by the various kaijin forces. As the Riders were about to be publically executed, Hongo and Ichimonji (having been faking their brainwashing in order to wait for the right time to fight Shocker) summoned all of the other Riders and were able to defeat the kaijin army.

The Double Riders have a rematch with Shocker Greeed while the other Riders rushed toward Great Leader. Shocker Greeed is destroyed by the Rider Double Kick before Ankh takes the Shocker Medal. When the Riders are overpowered by Great Leader's attacks, Ankh convinces OOO to use the Shocker Medal and an Imagin Medal from Momotaros in combination with the Taka Medal. With the three Medals, OOO changes into Tamashii Combo and destroys Great Leader with the Tamashii Bomber. However, the attack unleashes Great Leader Colossus - the true form of Great Leader, who throws fireballs at the Riders and consumes the other Shocker leaders in a violent earthquake. The Riders are joined by Kamen Rider Birth and all of the extra Riders to battle the new menace. All of the Riders jump into their motorcycles to execute the All Rider Break, destroying Great Leader Colossus once and for all.

However, the Great Leader's spirit managed to survive and possessed the History-Modifying Machine, using it to send Kamen Rider 3 back in time to defeat the Double Riders, allowing Shocker to achieve its domination of the world. He later absorbed Kamen Rider 3 into the machine to power it, shifting it into the Rider Robo to destroy the Kamen Riders. He was finally destroyed when Kamen Rider Drive's Tridoron combined with the Ninningers' mech Shurikenjin and they used their combined power to defeat him, resetting the timeline back to normal.

However, in an after-credits scene, the Great Leader is revealed to be alive and overlooks a new Kamen Rider, Kamen Rider 4.

Eventually, Kamen Riders Drive, Faiz and Zeronos tracked down the source of the time loops to Shocker's secret base and went there to confront the Great Leader. There, the Great Leader was revealed to be none other than a future Takumi Inui, who became the Great Leader of Shocker in order to alter the timeline to save his friends from dying.

At some point after Shocker's reemergence, Shocker Leader III succeeded the Great Leader as leader of Shocker and commanded the Shocker forces in the Game World.

The original Great Leader very briefly appeared on the title screen of the "Chou Shocker Taisen" bonus stage of the Chou Super Hero Taisen video game after it was triggered.

The Great Leader in this manga appears as a cyborg named Big Machine, who was capable of easily fighting off the Kamen Riders. He is the mastermind behind Shocker's October Project, which involved brainwashing the Japan using a super computer.

Big Machine's design was used as the basis for Ambassador Hell's design in the 1971 TV series, but was modified to have room for a face.

Have you seen the Kamen Rider?

In the alternate manga retelling of Kamen Rider, the Great Leader is depicted as a young child wearing an Eye of Providence pendant around his neck. Shocker in this manga is also shown to have been formed from the Freemasons, as opposed to the Nazis in the manga and TV series.

From Here to Eternity

The Great Leader appears as the main character of the Kamen Rider S.I.C. Hero Saga, which explores a possible origin for him. In it, the Great Leader explains that he was once a consul from a civilization in the Dark Nebula B-26 who was banished to Earth for an unknown reason. Finding Earth's lifeforms boring, the Great Leader modified the DNA of the Australopithecus afarensis to make them evolve into humans. Later on, the Great Leader created both Kamen Rider and Shocker to watch them fight each other for his own amusement.

The Great Leader serves as the final boss for the Kamen Rider video game for the Super Famicom, simply titled "Kamen Rider". In it he assumes his true form Death Paneater to fight the Kamen Riders.

The Great Leader appears in episode 5 of the series of comedic net movies in a scenario imagined by Kamen Rider Double. In it, he appears as a bamboo stick seller and attempts to sell one to Kamen Rider Nadeshiko to acquire funds for his organization. After Nadeshiko complains about the price being 58,000 yen, the Great Leader scolds her and threatens to sue her for not buying it since he went to the work of sawing it off.

The Great Leader wears a red robe with a KKK-esque hood and a medallion with the Shocker logo in the center. Under his hood are Medusa-like snakes that cover his true cyclops head.

Great Leader's primary ability is summoning gas from his body to knock out his foes. and whilst he never did this in the original series, in the Let's Go, Kamen Rider movie, he could use the snake heads as tendrils coming from his head and shoot fireballs from the snake's mouths.

Also in that film, he became his greatest form, the Great Rock Leader, one of the largest entities in both Kamen Rider and Super Sentai (one of the closest is Black Cross Colossus).

The Great Leader is also seemingly unkillable, as any time he is defeated or destroyed, he returns in a new form or resurfaces to antagonize the Riders regardless if he was defeated before (Usually by time travel or distortions in space/time). 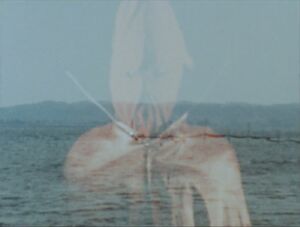 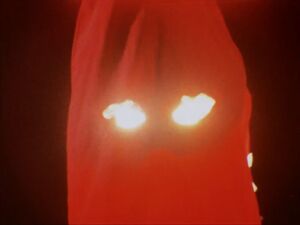 The Great Leader conjuring a fireball. 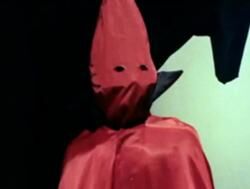 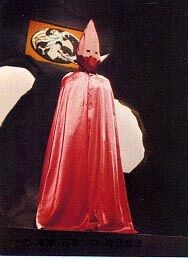 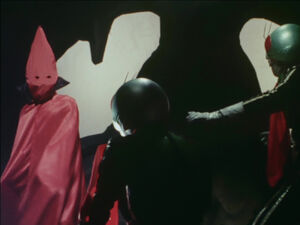 The Great Leader confronted by the Kamen Riders in Gel-Shocker's HQ. 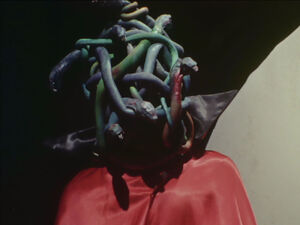 The Great Leader's medusa-like form underneath his mask. 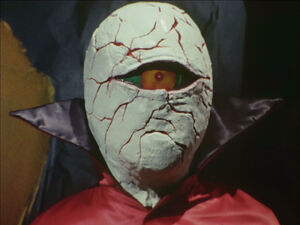 The true face of the Great Leader. 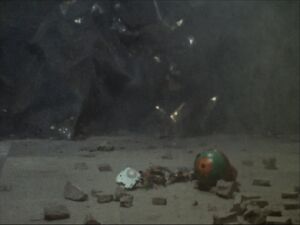 The Great Leader's brain exposed after he explodes. 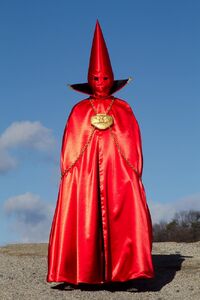 The Great Leader's new appearance in the alternate 2011. 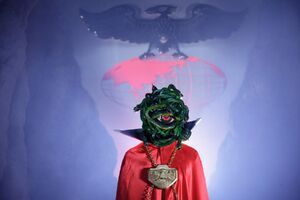 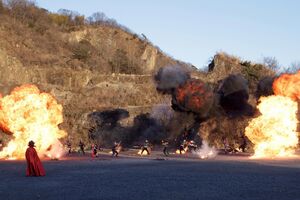 The Great Leader facing the combined forces of all past Kamen Riders. 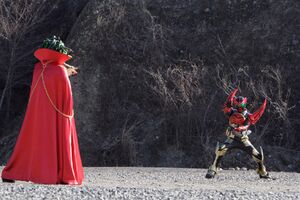 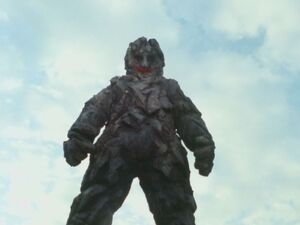 Retrieved from "https://villains.fandom.com/wiki/Great_Leader_of_Shocker?oldid=4214687"
Community content is available under CC-BY-SA unless otherwise noted.