Can throw huge mounds of excrement

Eat anyone who dares enter his fecal lair, Conker included

The Great Mighty Poo is an incredibly disgusting, but oddly musical monster, who is fought as a boss in the 2001 video game Conker's Bad Fur Day. He is quite literally a colossal living pile of fecal matter that inhabits an equally disgusting mountain of said feces.

He was voiced by Chris Marlow.

Conker first hears about the Great Mighty Poo upon meeting a bug, who tells him that his friends where abducted by a mysterious monster, never to be seen again and most likely eaten. (Flashbacks show the disgusting monster's hand seizing bugs and giving the others the finger.)

When Conker enters the Great Mighty Poo's cavern, he hears a booming voice demanding corn and decides to comply. Conker must knock down the (sentient) grains of corn and launch them into the central pool of feces, while staying away from the chasms and the monster's hand which sporadically emerges from the many holes in the arena to squish him.

Conker ends up meeting the Great Mighty Poo when he emerges from the pool with the (terrified) last grain of corn in his hand, and places it into his upper jaw as one of his teeth. For reasons unknown, this vile creature takes an instant dislike to our unfortunate squirrel protagonist and goes into a musical rampage in which it sings (with some very colorful language) while hurling bits of itself at Conker in an attempt to kill him. Eventually the Great Mighty Poo is defeated and Conker can progress.

During the first stage of the battle, Conker must dodge the Great Mighty Poo's projectiles and look for the toilet paper, which he must then throw into the monster's open mouth when he sings, before he vanishes and emerges somewhere else. After six successful shots, the Great Mighty Poo will sing so loudly that the glass protecting the flush switch will break. Conker will then have to reach and activate the switch and the Great Mighty Poo will be flushed away, never to be seen again. (While saying the Wicked Witch of the West's famous "What a world, what a world" dying speech, almost verbatim.)

Needless to say, the Great Mighty Poo is seen by many as one of the most unique (and bizarre) boss battles in the game. However, in spite or precisely because of this, he might be one of the most popular bosses that Rareware devised. 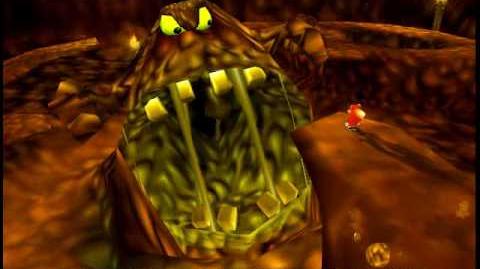 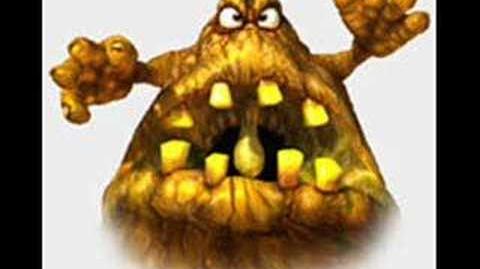 Retrieved from "https://villains.fandom.com/wiki/Great_Mighty_Poo?oldid=3179738"
Community content is available under CC-BY-SA unless otherwise noted.