Transform the Zenkaiger's dimension into a world of mushrooms.

He is voiced by Mitsuaki Kanuka who also voiced the Mushroom World.

The Great Mushroom World made its first appearance right after the destruction of the Mushroom World because it was a Kudaitest that was summon by Ijirude in a last ditch effort, but this big dinosaur accidentally steps on a Tojiru Gear as it gains both the personality and the same abilities as the Mushroom World shocking both Ijirude and the Zenkaigers. So with that being said both Juran transformed into a T-Rex and Gaon transformed into a lion to battle this here robot, but these here mechas has some difficulties battling against this here Great World Mushroom so Kaito tried to join them in the giant battle, but he'd accidentally made the first megazord that consist of both Juran and Gaon for the first time as the real battle begins.

They first fought on top of a giant mushroom and after kicking the Great Mushroom World down to the city below he summoned a couple of mushrooms to destroy the megazord but they were easily sliced, so he'd opened fired with his laser beam but the mecha splits in half dodging the attack. After that the Great Mushroom World was then destroyed by this finisher called Juran Sword Full Moon Crush thus freeing the Kinokotopia from the Tojiru Geart upon destruction.

The Great Mushroom World was later respawned by the Great Recycle World alongside the Great Boxing World, Great Ice World and Great Sushi World. It was destroyed again by Twokaizer in TwoKaiOh.

This Kudaitest originally had the same base personality as the rest of it's kind, but after becoming a Great World, it behaved much more like Mushroom World, though with more obsessiveness with the mushrooms. 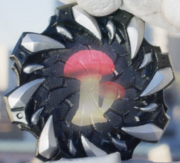