Transform the Zenkaiger's dimension into a world of fortunes.

The Great Omikuji World is one of two antagonist (the other is the Omikuji World) in episode 45 of 2022 TV series called Kikai Sentai Zenkaiger. He's a fortune slip-themed Great World from the Kikaitopia Dynasty Tojitendo who was created from the Omikuji Tojiru Gear that contained Omikujitopia.

He is voiced by Daisuke Sakaguchi who previously voiced a Human Body Specimen Org, Keeper Knight and later the Omikuji World.

The Great Omikuji World made his first appearance after the destruction of its counterpart as he decorated the entire area with a bunch fortune slips with different kinds of fortune, so with that they brought out Zenkai-Oh JuraGaon to battle this robotic dinosaur.

Now during the fight Kaito manages to pull out the Zenkaiju Gear as he goes giant and this time he combined with Juran to become Zenkai-Oh Super Juran as they open fired at the Great Omikuji World, but he used his Mugen Mikuji to give himself good luck as he easily dodges the bombardment by sliding on what appears to be a toy car. If that's not enough he tossed a pair of Fortune Grenades at the flying mecha separating Kaito from Juran.

Thankfully though Stacey was close by to the area as he used this ability and manages to free the Omikujitopia from the Tojiru Gear rendering this here Great World monster back into Kudaitest. Without the power of fortune the table was turned as the team takes on the Kudaitest and after that it was then destroyed by these two finishers and they are Juran Sword Full Moon Crush and Super Zenkai Super Kick. 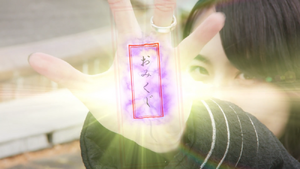