Transform the Zenkaiger's dimension into a world of Onigokko.

The Great Onigokko World is one of two main antagonist (the other is the Onigokko World) in episode 11 of 2021 TV series called Kikai Sentai Zenkaiger. He's a tag-themed Great World from Kikaitopia Dynasty Tojitendo created from the Onigokko Tojiru Gear that contains Onigokkotopia.

He is voiced by Junta Terashima who also voiced the Onigokko World.

The Great Onigokko World made his first appearance after the destruction of the Onigokko World as one of the Kudaitest steps on the Tojiru Gear transforming into the said Great World as he summons a giant playground straight from the ground prompting the team to bring out ZenkaiOh JuraGaon to battle the two giant robots.

They tried to turn the game off, but this result caused them to receive a bomb which means if they don't tag a person anytime soon they'll explode to smithereens! With that being said both the Kudaitest and the Great Onigokko World high tailed it out of here as JuraGaon chased them. Thankfully VrooMagine creates a trip hazard causing the Kudaitest to trip and fall as he got tagged now leaving the Great Onigokko World left. However he creates another mask bomb as he prompt to tag one of the mechas in hope of blowing one of them up prompting the two mechas to flee in fright as they don't want to be tagged. 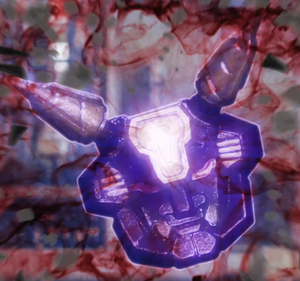