Transform the Zenkaiger's dimension into a world of SD.

The Great SD World is one of two main antagonist (the other is the SD World) in episode 44 of 2022 TV series called Kikai Sentai Zenkaiger. He's an SD-based Great World from the Kikaitopia Dynasty Tojitendo who was created from the SD Tojiru Gear that contained SDtopia, the world where Ricky Goldtsuiker and Cutanner Goldtsuiker got their SD forms.

The Great SD World is voiced by Naoya Uchida who previously voiced Raiken, Rairaiken, Kukuruga, a Safe Jamen and the SD World.

The Great SD World made his first appearance after the destruction of his counterpart as he transformed the entire battle area to resemble that of a cartoon. So Zox was about to bring out his mecha, but he's going to sit this one out due to how severe is injuries are, so with that the team brought Zenryoku ZenkaiOh and battle this robotic dinosaur.

After that the Great SD World was then destroyed by this finisher called Zenkaiger: All Sentai Final Big Bang (followed by a couple of slashes and blasts from Cutanner and Ricky), thus freeing the SDtopia from the Tojiru Gear. 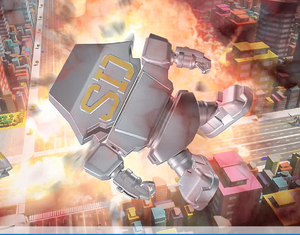