Training the in Usui forest with Phantom Butterfly (formerly when he was young).

Take the Dragon's blood and conquer all of Japan (failed).

Ukonzaemon Usui, also known as The Owl or better known as The Great Shinobi Owl, is one of the two main antagonists (alongside Genichiro Ashina) and boss in the 2019 game Sekiro: Shadows Die Twice. He is a skilled and treacherous shinobi who served under the Ashina clan before betraying them in pursuit of power and political control. Overall, he is the heavy of the game, as most of the events are directly influenced by his machinations.

He is voiced by Takaya Hashi in the Japanese version, who also voiced the Auroral Serpent from Dragon Quest XI. He is voiced by Darin De Paul in the English version.

Little is known about Owl's backstory. Dialogue initiated by offering sake to Isshin and subtle information from item description suggests that Owl and Lady Butterfly were friends since childhood, since both come from the 'Usui forest' where they trained. In the aftermath of Isshin's rebellion, while scavenging one of the battlefields, Owl found a boy amongst the corpses. Impressed by the boy's unwavering spirit, Owl takes him under his wing and raises him as his own son, even giving him the name 'Wolf'. Owl teaches Wolf the way of the shinobi and after the training is complete, he sends him off to serve under his new master - Lord Kuro of the Hirata line. It is around that time that Owl begins to plot against the Ashina clan.

During the time after Isshin's re-founding of the clan and his betrayal at the Hirata estate, Owl was friends with Lady Butterfly, Isshin Ashina, Gyoubu the Demon and Dogen, as he shared sake with them and speaks of them with some respect.

Three years prior to the events in the game, bandits led by Juzou the Drunkard attack and ravage the Hirata estate. Some of the survivors believe that the bandits' assault was too well-coordinated and perfectly timed to match the Interior Ministry's attack on the Ashina clan. It's revealed that Owl and the Interior Ministry worked together in order to manipulate events in their favor, by baiting the main Ashina forces likely led by Genichiro and Gyoubu, leaving the Hirata estate defenseless.

During that time, it is possible that Owl had also sent Wolf away on a false mission to prevent him from interfering with his plans. With the estate occupied by the bandits and Wolf absent, Owl sends Phantom Butterfly to retrieve Kuro the Divine Heir likely to make use of his sacred blood. Knowing that Wolf would likely show up, Owl devises a backup plan where he pretends to die in front of him, only to later stab him in the back as he kills Phantom Butterfly.

After Wolf collects nearly all of the ingredients needed to make the Fountainhead aroma, Owl makes his next move and invades the castle with a force of Lone Shadows - agents of the Interior Ministry- and Senpou Temple assassins. He confronts Kuro at the Castle Lookout, asking to 'protect' him, but being only met with denial, since Kuro has a good idea of what Owl's true intentions are.

After eavesdropping on their conversation, Wolf reveals himself to his foster father. He wonders how is it that he is alive, to which Owl replies that it was by his 'design'. Owl himself is surprised by his son's apparent survival and questions him about it. After learning of the Dragon blood's capabilities, Owl becomes determined to take that power for himself and urges Wolf to forsake Kuro and join him in his quest for power, revealing his true colours.

Wolf disobeys his father's orders, breaking the Iron Code. This troubles Owl and he pretends to be deeply upset about it before attempting to backstab his son once again. This time, however, Wolf expects the attack and blocks it. After commending on Wolf's growth as a shinobi, they both engage in a hard battle. Despite using every trick up his sleeve, Owl is eventually beaten and killed by Wolf.

Wolf can choose to side with Owl instead, resulting in an entirely different turn of events. Owl makes his leave shortly after Emma appears, leaving Wolf to deal with her and Isshin. In the meantime, he seeks out Genichiro and kills him, taking the Black Mortal Blade and his head. He returns to the castle carrying both in his hands.

After putting Genichiro's head near his grandfather's corpse, Owl commends Wolf on defeating the Sword Saint. Owl declares that now there is nothing that could stop their absolute reign over Japan, but just as he announces his name, Wolf stabs him from behind, which results in his transformation into a complete Shura.

As a result of this, many die and lands of Ashina are haunted by the newly born demon for many years to come.

In an alternative vision of the Hirata Estate attack, Owl is killed again by Wolf, who does so in order to obtain the Aromatic Flower, which allows for the Purification ritual to happen.

Owl is a nameless rogue shinobi striving for greatness. He is cunning, manipulative, cruel and ambitious. Unlike Genichiro, he has absolutely no qualms about his actions and is more than willing to let hundreds die in order to fulfill his goals. Every time he is on screen, he is constantly trying to deceive those around him in order to catch them off guard or make them do what he wants them to do. Even if Wolf sides with him, Owl leaves him all on his own, likely because he loses nothing even if Wolf were to be put down.

It's clear that Owl respects and maybe even fears Isshin, as he mentions how only a few could hope to defeat the Sword Saint, despite his fragile state.

Despite his deceitful and merciless characteristics, Owl is shown to have a shred of compassion for Wolf; he expresses remorse for the imminent duel in the second Hirata encounter and takes pride in Wolf's victories when he defeats him. When Wolf breaks the Iron Code, he falls to his knees, visibly disappointed and lamenting his decision. However, true to his core, Owl is not hesitant to pull his sword on his foster son, and is not above mocking him during combat or after Wolf's defeat. 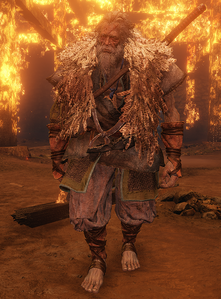 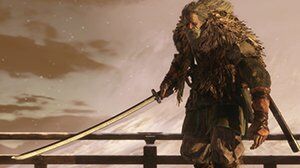 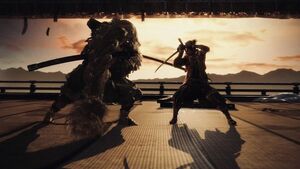 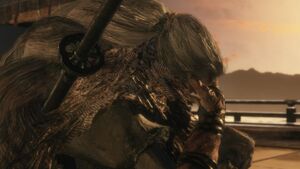 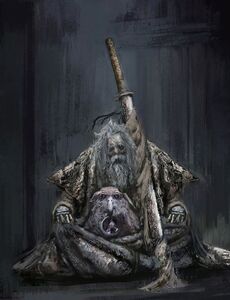 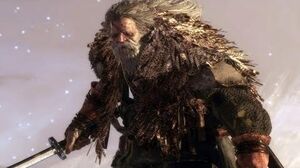