Make a name for himself in Gotham's criminal underworld (both succeeded).
Get revenge on Two-Face.

Warren White (also known as the Great White Shark) is a villain from the Batman series. He first appeared in the miniseries Arkham Asylum: Living Hell.

A crooked financier who embezzled millions of dollars from his clients, Warren White evades prison by pleading insanity and being institutionalized in Arkham Asylum. Upon his arrival there, however, the other inmates, disgusted by his crime, make his life miserable until he genuinely goes crazy. Finally, he is disfigured after being locked inside Mr. Freeze's cell, with its freezing temperatures giving him hypothermia that causes his hair to fall out and his nose, ears, and lips to rot off. Killer Croc also attacks him, slashing his throat and giving him "gills". Calling himself the Great White Shark, White sharpens his teeth to fangs, a perfect resemblance to his new namesake. Putting his financial skills to use, he becomes a major player in Gotham’s criminal underworld, running a number of rackets from his cell in Arkham.

While Great White remains in Arkham, he uses his mob connections to kill those who associated with The Penguin and framing Two-Face for the murders. Batman confronts Great White and threatens him to tell Two-Face about framing him, promising Two-Face to let him have a shot at Great White once he is captured and sent to Arkham.

After Black Glove failed to destroy Batman, all Arkham Asylum inmates were transferred to Blackgate until Arkham was completely decontaminated. While transported to Blackgate, the new Black Mask attacked the vehicles and forced the inmates to join his army. Great White was among the army with other inmates.

The Great White Shark doesn't appear in the game Batman: Arkham Asylum, but one of the Riddler's riddles revolves around him. Also found are jars that contain his, nose, ears, lips, and two of his fingers.

Although he doesn't appear in person in the game he is referenced on a sign that says W WHITE. He is also mentioned as an employer of The Broker.

Again he doesn't appear, but his facial parts are seen in the GCPD evidence room along with items belonging to other supervillains. Aaron Cash will give a commentary on Warren White.

In The Batman vs. Dracula, an inmate, who is similar to Warren White before taking on his Great White Shark persona, appears. 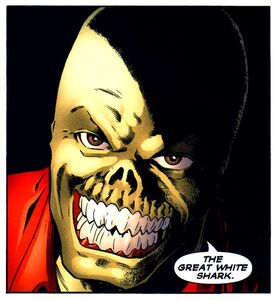 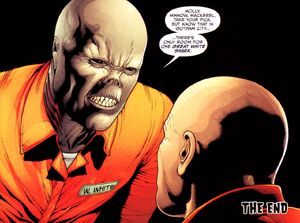 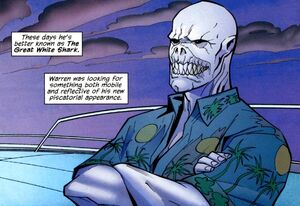 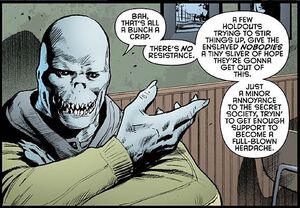 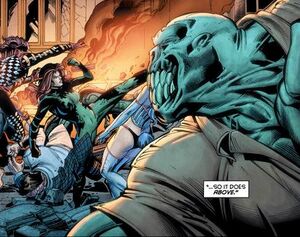 Retrieved from "https://villains.fandom.com/wiki/Great_White_Shark?oldid=4235978"
Community content is available under CC-BY-SA unless otherwise noted.