Prowl on their prey's turf.

Collect and harvest as many humans as possible.

The Green Aliens are the main antagonists of the 2002 science fiction-religious film Signs. They are a green-skinned reptilian alien species that came to Earth to study, capture, and harvest as many humans as possible.

The aliens are comparable in height to humans, which can make them mistakable for being men under poor lighting conditions. Their skin has a reptilian green tint to it by default, which changes color to camouflage them with their surroundings.

This attribute is so precise that it can even project facial features of others onto the skin. Their faces have general humanoid features, though they lack extruding ears and nostrils and feature milky, glass-like eyes.

The aliens are also apparently carnivorous, with them featuring sharp white teeth. Protruding from their wrists are cones that dispense a gas that is toxic to humans.

At maximum health, the aliens are extremely dangerous, with their strength and stamina being comparable to Olympic athletes in all regards. However, they are susceptible to water damage, which has an acidic effect to them.

While the characteristics of the aliens are largely speculative and inferred by the characters of Signs, it can be assumed that they are predominantly accurate.

The aliens are implied to be master tacticians, with them recognizing the necessity of exploiting weaknesses of their prey, such as structural hindrances, etc. During invasions, the aliens mark their target locations with symbols that are used for coordination.

The aliens' method of combat is hand-to-hand, as they recognize that humans have access to nuclear weapons, which would be impossible to content with.

The movies begins with the Hess family waking up one morning. We see Graham Hess, played by Mel Gibson, waking up, sensing something is wrong. He goes to the doors of the kids to check on them.

As he is brushing his teeth, a girl screaming can be heard. This wakes both him and his brother, Merrill, played by Joquein Phoenix up. We then hear a boy shout out for his uncle and father, and they run to the back cornfield. We then see Bo, Graham's daughter and youngest child, played by Abigail Breslin, walking in a corn maze.

We then see Morgan, played by Rory Culkin. Morgan says the dogs woke them up. We then see a giant crop circle, part of a formation of 2 more circles, the others having things connected to them. Morgan thinks "God did it." Graham dismisses it as a hoax. Officer Caroline Paski, played by Cherry Jones, comes by to check out what's going on.

That night, Bo wakes Graham up and says a monster is outside her window. She then asks for a glass of water. As Graham tries to relax her to sleep, He sees a shadowy silhouette of a figure standing on the barn roof. Alarmed, he wakes Merrill up and they try to scare away the figure, believing it's Lionel Pritchard, a local prankster.

The brothers debate how to do. Graham is reluctant, but Merrill is eager. The brothers run screaming around the house to frighten off the intruder. Things get strange when the figure jumps within a second. And the movie at that point hints that this intruder could not be human. The figure jumps onto the roof, and Merrill tries to make of it. The figure then jumps off fast and into the cornfield.

The next day, Sheriff Paski stops by to investigate the intruder. Caroline tries to make of what they saw. However, she, along with Graham and Merrill are frustrated. The investigation is cut short by Bo, saying that the TV is reporting numerous crop circles appearing in India. On that night, the dog barks incessantly towards the cornfield. Taking a flashlight, Graham walks into the cornfield trying to find out what is in the cornfield. A noise is heard and Graham enters the crop circle. Graham yells that the whoever is causing the circles is "wasting [their] time." As Graham walks back to the house, he hears a noise and spots a thin green leg among the cornrows. He runs back to the house, frantically, petrified.

The family then watches new about reports of several unidentifiable and mysterious lights hovering over Mexico City. The following morning, Merrill tells Graham about how the kids recorded a video of a bird hitting something in the sky - in the same area where the lights were hovering. It's learned that the spaceships can turn cloaked. Graham receives a cryptic phone call from Reddy, the man who killed his wife, however it's cut short.

Graham goes to see Reddy and finds him sitting in his car wearing a bloody shirt. Meanwhile, a frightened Merrill watches news of an alien walking through a garage road during a child's birthday party in Brazil. Reddy tells Graham that he is going to the lake, since none of the aliens have been seen near water. Before leaving, Reddy pauses to apologize for the accident that killed Colleen and tells Graham that he trapped an alien in his pantry. Investigating, Graham uses a kitchen knife to see the reflection of the alien under the door. A clawed hand reaches out and a startled Graham cuts off two of its fingers.

Back home, Graham gives his family the options to stay at the house or head towards the lake. They vote to stay, not wanting to leave their home. They board up the windows and doors, preparing for any possible attack.

Meanwhile, it is reported that more mysterious lights have been spotted worldwide and that the aliens are hostile. Merrill suggests that the crop circles in their cornfield, among others, are for alien navigation. Graham prepares a "last meal" for the family, with each picking their preferred dish.

They are interrupted when they hear a baby monitor, which they had earlier discovered could pick up the aliens' communications, alerting them that the aliens are approaching. They listen as the aliens, seeking a way in, walk around the house.

The dog, which was accidentally left outside, barks alarmingly but is quickly silenced. Merrill suddenly realizes that the attic was left unprotected and they quickly move to the basement, barring the door. In deleted scenes, Merrill and Graham try to find a way to keep the attic door from opening, allowing to think up a plan, which will end up being the basement. Merrill holds the door, just in time for the aliens to try to bust in. Graham finds a china and blocks the door. They then take the kids to the kitchen.

The aliens can be heard inside the house and try to enter the basement. An alien grabs Morgan from the disused coal chute. It is driven away, but Morgan has an asthma attack. Graham realizes his inhaler was left upstairs, so he calms Morgan, hoping that the boy's breathing would return to normal.

The next morning, Morgan's condition has improved and the radio reports that the aliens are retreating. They return upstairs but are ambushed by a lone alien, who takes the comatose Morgan hostage.

Graham notices two fingers are missing, meaning it was the alien trapped in Reddy's pantry. Graham suddenly remembers the night that his wife died. She was pinned by a car and the Sheriff tells Graham that when the car is moved his wife will die.

He talks to her and she tells him to let Morgan have fun and be silly, and for Bo to always listen to her brother because he will take care of her. She then tells Graham to "see" and "tell Merrill to swing away."

Graham realizes there was meaning in his wife's final words. Looking around, he sees Merrill's mounted record home run bat, next to Merrill. He tells Merrill to "swing away." Merrill understands and grabs the bat. Sensing an attack, the alien sprays a toxin into Morgan's face. Merrill swings at the alien, who then drops Morgan, causing one of Bo's water glasses to spill on it. The water acts like acid on the alien's skin, Merrill quickly catches on, and starts smashing all of the half-filled glasses, before finally knocking the alien into a table, where water glasses spilled directly onto its face, killing it. 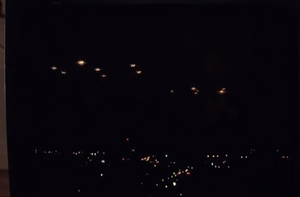 The aliens' spaceships - the lights in the sky shown on the TV. 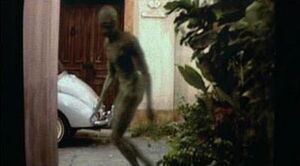 Alien in the "Brazilian Party" video.