NOTE: For the DreamWorks Animation version of this character, click here.

King of the Dragons

Exterminate humanity.
Kill Hiccup the First.
Devour all the Vikings of Berk (all failed).
Kill the Purple Death (succeeded).

Kill Hiccup, Toothless and any other opposition (all failed).

The Green Death, also known as Merciless, is the main antagonist from the first book of the How to Train Your Dragon book series and a posthumous antagonist in the other books.

He is a Seadragonus Giganticus Maximus who wanted to devour every Viking on Berk, including Hiccup. He was also the leader of the first Dragon Rebellion and came into conflict with Hiccup the First.

In the first book, the Green Death arrives on Long Beach with a smaller Seadragonus Giganticus Maximus (which he eats later on). Hiccup is sent to meet with him and asks if he comes in peace or war as he is the only one who can speak Dragonese.

When Hiccup says his name the dragon shivers subconsciously he seems however that Hiccup did not notice it nor did the Green Death itself. The dragon says he comes in peace but that he's still going to eat them all regardless. The Green Death and Hiccup discuss Singing Suppers, but during the conversation the Green Death moves in to eat Hiccup.

In the following battle, the Purple Death is killed. However, the Green Death is fatally wounded. In anger, the Green Death swallows Hiccup whole. Fortunately, Hiccup avoids being digested by grabbing and holding on to a Roman spear stuck in the dragon's throat. While inside the Green Death, Hiccup discovers the fire holes (a dragon's source of fire) and blocks them with his helmet. Due to this, the Green Death blows up when he tries to burn Stoick, Hiccup, and Toothless. His death makes Hiccup a hero in the eyes of his tribe.

How to Steal a Dragon's Sword

Green Death appeared as a gigantic "gob-smackingly vast" green dragon, as his name suggests. He comes off more like a mountain than a living creature and dwarfs a Tyrannosaurus Rex. His teeth are 20 feet long, which would make his estimated size 990 feet long. He is covered in barnacles as a to form a natural armour. His scales are a dark green - the color of the ocean. His fire is green.

An incredibly evil dragon, he seeks to wipe out humanity. He is quite fearful of Hiccup due to seeing his future death at the hands of a Hiccup. He enjoys devouring everything he comes across, from humans to other dragons. He is very sadistic, enjoying playing with his food and taking pleasure in the terror Hiccup and Stoick have of him. He views himself as a philosopher who states him devouring those smaller than him is the "way of the world". He kills others for fun or for petty reasons such as being "full of [themselves". He is very prideful, risking a deadly battle with another Seadragonus Giganticus Maximus due to believing the latter had belittled him. He was also very vengeful, such as how he tried to kill Hiccup after the plan to kill him. 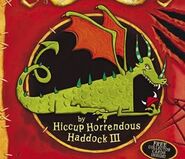 The Green Death on the book cover.

The Green Death on the German cover.

The Green Death about to swallow Hiccup.