Green Death (in the books)

Queen of the Dragons

Kill the Vikings of Berk and keep the dragons on feeding it.

Rule the world (all failed).

In the first book, the Green Death arrives on Long Beach with a smaller Seadragonus Giganticus Maximus (which she eats later on). Hiccup is sent to meet with she and asks if she comes in peace or war as she is the only one who can speak Dragonese.

When Hiccup says his name the dragon shivers subconsciously she seems however that Hiccup did not notice it nor did the Green Death itself. The dragon says he comes in peace but that he's still going to eat them all regardless. The Green Death and Hiccup discuss Singing Suppers, but during the conversation the Green Death moves in to eat Hiccup.

In the following battle, the Purple Death is killed. However, the Green Death is fatally wounded. In anger, the Green Death swallows Hiccup whole. Fortunately, Hiccup avoids being digested by grabbing and holding on to a Roman spear stuck in the dragon's throat. While inside the Green Death, Hiccup discovers the fire holes (a dragon's source of fire) and blocks them with his helmet. Due to this, the Green Death blows up when she tries to burn Stoick, Hiccup, and Toothless. Her death makes Hiccup a hero in the eyes of his tribe.

In "How to Steal a Dragon's Sword", the Green Death was known as Merciless, the leader of the Dragon Rebellion in Hiccup Horrendous Haddock the First's time. Merciless saw in the future that he was to be killed by a human named Hiccup. He sent Wodensfang to kill Hiccup, but was instead betrayed by Wodensfang when Wodensfang discovers the good in Hiccup's heart. With the Dragon Jewel, Hiccup ordered Merciless to disband the Rebellion and become a loner.

The Red Death first appears when Hiccup, Toothless, and Astrid discover the Dragon's nest, feasting off what her servants feed her. After a Gronckle drops a tiny piece of fish to the Red Death, he emerges and devours the dragon. Then, the Red Death tries to eat Hiccup and his friends when she spots that Toothless has contributed nothing and has humans on his back, but they manage to escape.

The Red Death appears again when Stoick and his vikings attack the Dragon's nest. She attacks the vikings and destroys their ships in the process. Fortunately, Hiccup and his friends arrive and while Hiccup's friends distract the Red Death, he and Stoick save Toothless from drowning as he was caged on one of the sinking ships. Hiccup and Toothless then drive the Red Death into the clouds and conceals Toothless' form. Toothless fires several plasma blasts at the Red Death's wings but they don't have an effect on the monster. Enraged, the Red Death shoots fire in all directions around herself and manages to inflame Toothless's tail. Using as much time as they had left, Hiccup and Toothless lead the Red Death out of the clouds and allowed her to chase them until she attempted to wear a fatal blow at them. However, Toothless fired a plasma blast down her throat, lighting her insides ablaze. The dragon's wings are ripped apart, causing her to fall to the ground and resulting an explosion, killing the Red Death for good.

The Red Death primarily uses her enlarged nostrils and hearing in order to hunt down its prey. Her skull is heavily armored and it has a tail specifically designed to smash into objects. It has been shown to have an incredible speed in flight despite its size, being able to keep up with Toothless for long amounts of time. The dragon also does not have a blind spot, due to it having six eyes instead of two. The Red Death's flame jets are enormous and are powerful enough to take down an entire Viking fleet of ships in just one breath. Like other dragons, however, the Red Death cannot hunt efficiently if her wings are damaged and it is just as susceptible to fire on her insides.

"This ultimate monster, seen pursuing Toothless and Hiccup, is the most vicious. According to legend, she lives 2,000 years and, before she dies, lays 3,000 eggs. The hatchlings fight each other to the death, a process that can take up to 100 years, until only one survives. "All dragons have a blind spot," Sanders says. "Except this one. That is one reason we gave him six eyes instead of two. The other reason is that we wanted him to be just generally upsetting. This one is our Godzilla."" 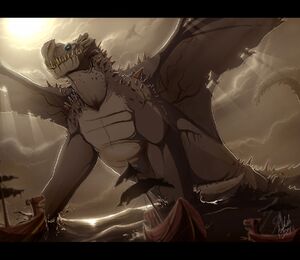 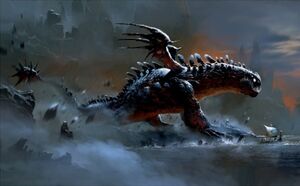 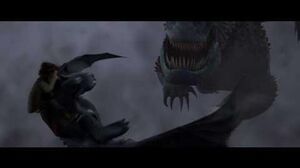 Retrieved from "https://villains.fandom.com/wiki/Green_Death?oldid=3292067"
Community content is available under CC-BY-SA unless otherwise noted.