Wrathful Dragon
The Green Dragon (ドラゴン, Dragon in Japanese) is a rarely appearing monster in the Dragon Quest series. Introduced in the original game, they are powerful, scaly beasts of legendary status.

In appearance, green dragons are quadrupedal and wingless, their underbellies an orange-brown shade. Like dragons in most other tales, green dragons are powerful, boasting impressive stamina, strength, and resilience, as well as the ability to breath fire.

Green Dragons are usually show to be beastly and wrathful, as in 3D Dragon Quest games like X and XI, where their intro animation has them roaring at the Hero and his party.

While they can be found in the overworld (Mainly Damdara and the Dragonlord's Castle), a specific one is guarding Princess Gwaelin in the Quagmire Cave, and must be fought to rescue her. This green dragon was no different from it's brethren originally, but was given a full boss promotion in the remakes.

The Green Dragons reappear as enemies in Cave to Rendarak floors 5 and 6, and the Hall of Hargon.

Green Dragons once again are enemies, being encountered in Alfegard and Zoma's Citadel. They can call in for Elysium Birds when the going gets tough.

A Green Dragon appears as a boss in X from Verison 5 on November 20 onwards, and having more deadly abilities, such as a fire breath that leaves charred ground in its wake, calling in rocks, and Hellfire Howl. Another one can be encountered in the Dragon Quest event from June 17th to the 28th, once again being fought in the Dragonlord's Castle.

Green Dragons are normal enemies once again, being found in places like the Ruins of Dundrasil. When Mordegon rules over all of Erdrea, they become Vicious as a result of his power. 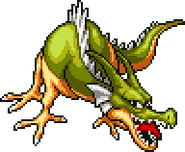 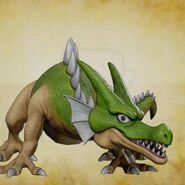