Kill the cosmic heroes (both failed).

Norman Osborn, also known as the Green Goblin, is a recurring antagonist in the 2005-2009 Marvel Zombies comic book metaseries, which takes place in an alternate version of the Marvel Universe, called Earth-2149, where all super-powered beings became infected by an extraterrestrial virus which transformed them into Zombies.

Little is known about Norman's life before the zombie plague occurs on Earth-2149, but it can be presumed is most likely the same as his Earth-616 counterpart.

After Sentry landed on Earth-2149, he infected the Avengers, causing them to spread the virus all over the world. After about 24 hours, almost every hero and villain was turned. The Green Goblin is seen with the Sinister Six fighting against Wolverine and Magneto.

As they put in a few last minutes adjustments, they assemble around the device and fire right at the planet eater. The first blast visibly shakes the giant, the second blast causes him to crash down to the ground, sending the villains to run from the falling planet eater. Once Galactus was down, the villains rush back to him as they planned to devour the giant. However, they were stopped by their arch-enemies, as they claim "Our kill, our feast!". A fight breaks between the cosmic zombies and the zombified super-villains. However, they were killed by the cosmic heroes.

The Green Goblin took part of the group that attacked Ape X, Gorilla Girl, Jane Potter, and the Red Ghost's Super-Apes after they arrived into the zombiverse. He is later seen feeding on Wrencher and was killed by Gorilla Girl. 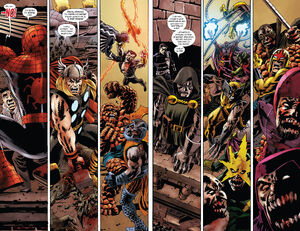 The Green Goblin fighting against Wolverine and Magneto. 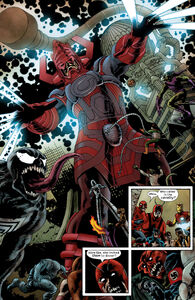 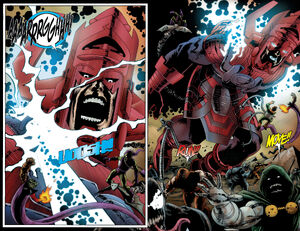 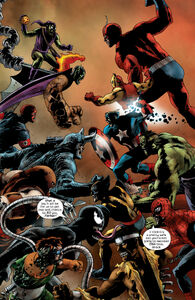 The villains facing off their arch-enemies. 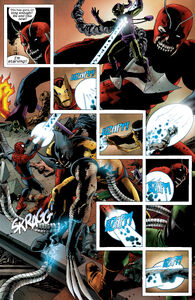 The Green Goblin being killed by Spider-Man. 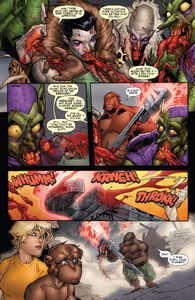