The Green Goblin and Mr. Osborn

Causing destruction or chaos, killing those who have "earned" his wrath, acquiring power and tormenting Spider-Man

Kill those who get in the way of his continued success, corrupt or kill Spider-Man and kill Spider-Man's loved ones and also to destroy the entire city (all failed)

The Green Goblin is the main antagonist in the 2002 film Spider-Man. He is Spider-Man's arch enemy, and as such it is no surprise that when the film was released, he was the chosen villain. Though still very much a villain, he has a few differences from his mainstream counterpart.

He is portrayed by Willem Dafoe, who also portrays John Geiger and Jack Lassen., and Rat (Fantastic Mr. Fox).

Norman Osborn first appears as the owner of Oscorp and the father of Harry Osborn. He is initially pleasant and supporting of Peter's friendship and scientific potential, also wanting his own son to recognize his own potential. Unfortunately, his company begins to struggle, with Osborn's promised performance-enhancing serum for a military contract having been hit with setbacks, not the least of which being that rodents it has been tested on have displayed violence, aggression, and insanity. Upon being told that his funding is on the verge of being cut, Norman becomes desperate and ultimately tests the serum on himself. The process drives him mad and he promptly murders his own scientist Doctor Stromm. He wakes up afterwards in his home amnesiac and sick.

Later, Quest Aerospace, another company competing for the military contract, suffers a bombing attack, unknowingly caused by Osborn using some of his own inventions. Later, Osborn learns that his Board of Directors intend to sell Oscorp to Quest and are expecting his resignation. Enraged at being forced out of his own company, Osborn again becomes the Green Goblin and murders the board members, also first encountering Spider-Man, who he becomes intrigued by.  Waking up the next morning, Osborn at last realizes what he is doing but succumbs to the influence of his malevolent and sadistic other half.  Attacking Spider-Man, he tries to convince him to join his cause, but is later rejected.

As time passes, Norman begins to lose himself more and more to the Green Goblin half inside him, attacking and threatening May Parker to spite Spider-Man and also let him know that he is aware of his secret identity.  The two's feud comes to a head when Green Goblin abducts Mary Jane and threatens to kill her, forcing Spider-Man to choose between her or a sky-cab full of innocent civilians, including children.  Spider-Man however, is able to save both the sky-cab and Mary Jane, assisted by civilians who attack Green Goblin and condemn him for his threatening children's lives.  Enraged, Green Goblin takes Spider-Man to a deserted area where their battle resumes. Green Goblin savagely beats Spider-Man and vows to make Mary Jane suffer as punishment for Spider-Man's "really pissing him off". However, this threat only succeeds in invigorating Spider-Man, who manages to defeat Green Goblin.  Green Goblin finally unmasks himself as Norman Osborn, who begs for forgiveness from a horrified Spider-Man by saying 'be a son to me now'. Unfortunately, the Green Goblin's hold on Norman is strong enough for Norman attempting to skewer Spider-Man from behind with his glider. Alerted to it by his Spider-Sense, Spider-Man moves out of the way and Norman is impaled by his own glider. Freed from the Green Goblin's control, Norman begs Peter not to tell Harry about his crimes, right before he finally dies.

Spider-Man takes Norman's corpse back to the Osborn mansion and leaves, but not before Harry spots him with his father's body. At Norman’s funeral, Harry vows to exact revenge on Spider-Man, believing him responsible for killing his father, and asserts that Peter is all he has left.

Though deceased, the malevolent half of Norman Osborn would live on as a figment of Harry Osborn's imagination, goading him to continue his father's legacy and seek vengeance on Spider-Man. However, Harry soon learns about the true circumstances behind his father's death and abandons his vendetta against Spider-Man.

Norman Osborn attempts to connect with his son

Norman Osborn succumbs to the darker side of his personality

Norman transforming into the Green Goblan

Goblin attack the festival party and killing the Oscorp board members 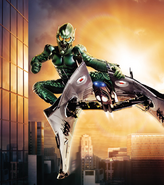 "Now, choose!" -After Goblin drops Mj and the tram, making Spider-Man who he wants to save first 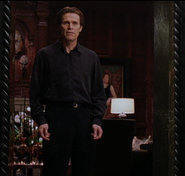 Norman as he appears in a mirror as Harry's hallucination in Spider-Man 2
Add a photo to this gallery
Retrieved from "https://villains.fandom.com/wiki/Green_Goblin_(Spider-Man_Films)?oldid=1235577"
Community content is available under CC-BY-SA unless otherwise noted.