The Green Goose is the main antagonist in the 1966 cartoon feature film The Man Called Flintstone. He is the arch-nemesis of Fred Flintstone and Barney Rubble.

He was voiced by the late Paul Frees.

The Green Goose is a very diabolical, power-crazed madman bent on conquering the world by any means necessary.

Green Goose is slender with fair skin and black eyes. He wears a black and green-bordered mask, a black cloak on the outside with green on the inside, a green loin cloth and a teal collar, gloves and shoes with claws.

As the film starts, super-spy Rock Slag fends off but is injured and taken out of commission by thugs working for the mysterious mastermind, The Green Goose. For a variety of reasons, only Slag can see a plan through to expose and capture the Goose, and when Rock is re-injured at the hospital, his superior comes across Rock Slag's identical twin - none other than the hapless Fred Flintstone, who had been planning to take his and Barney Rubble's family on a camping trip. The prospect of a European trip plus an adventure has Fred, and soon his family and friends, on board.

As Fred fends off the same assassins that injured Rock, he meets with Rock's fellow agent, Triple X, a master of disguise, and the Goose's supposedly defecting senior henchperson, Tanya, who was an admirer of the renowned Rock Slag. However, having dinner with Tanya angers a witnessing Wilma, who later finds and re-injures the just recovered Rock Slag. Slag's injuries plus worries about the Goose's plans for world domination force Fred back to the original plan.

But as he meets again with Tanya, both she and Triple X betray Fred, with Triple X revealed as The Green Goose himself. Fred attempts to explain who he really is, but his earlier fumbling survival against assassins Ali and Bobo have convinced them he really is Rock Slag. With a captured Barney Rubble tortured to get Fred to talk, the two friends ultimately end up trapped inside the Goose's secret weapon, a deadly inter-continental missile, set to destroy enough of civilization for the Goose to rule the world that comes after.

In the end, even as he has both Fred and Barney trapped inside the missile, the Green Goose's greed gets the better of him. Seeing a gaudy fake necklace Fred bought Wilma as a gift, the Goose offers to trade Fred his life for it. Thinking quickly, Fred and Barney lure the villains inside the missile, trapping them as it takes off, reset for outer space. Presumably, the villains meet their fate when it explodes.

As Fred states, so often, those that try to rule the world, end up being put out of it. While publicly acclaimed as a hero, Fred finds his time as Rock Slag has one more danger - hordes of adoring women who are no more accepting of his true identity than the Goose and Tanya were. Not wishing trouble with Wilma, Fred flees for his very life.

Green Goose with his minions. 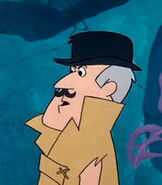