Eat the eggs that they steal.

Prevent the Angry Birds from regaining their eggs.
Various on episodes.

The Bad Piggies (or simply "The Pigs") are the main antagonists of the Angry Birds video game series and the titular protagonists of the Bad Piggies and Piggy Tales. They are dimwitted and incompetent pigs with a green skin and they seek to steal eggs from the Angry Birds. To prevent the birds from reclaiming their eggs, they construct buildings and other structures. The Pigs reappear in Angry Birds Rio as balloons.

They are all green in color and come in different variants: small, medium, and large and sometimes wear different accessories and hats.

Throughout the levels of Angry Birds, the pigs can be seen standing on or near obstacles which the player must knock down by launching the Angry Birds from a slingshot. Depending on the impact of the launched bird, the pig may show signs of injury (such as a black eye) if the impact wasn't strong enough. If the impact was strong enough, the pig would vanish into smoke, indicating its defeat. The next level begins once all the visible pigs are killed by the knocked over obstacles.

Other than plotting and stealing eggs, they do not seem to do much else. They do not pose as much of a threat as they do not fight back when under attack. In fact, in Angry Birds Toons they are shown to be rather incompetent. In the cartoon, they also always ended up overpowered every moment they attempt to fought back. The King Pig in cartoon depicted as overweight, chubby pig with slightly different crown unlike his game counterpart, whom body is round like other pig. 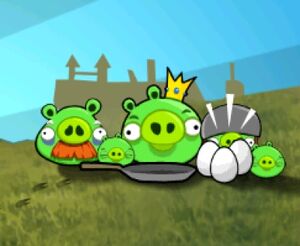 King Pig in his Chrome design 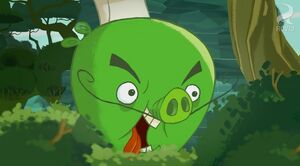 The Chef as seen in Angry Birds Toons.

Night of the living Pork 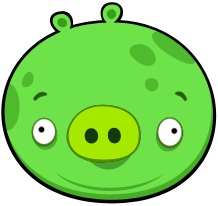 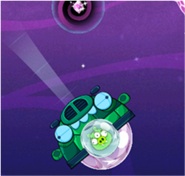 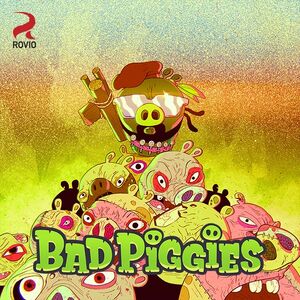 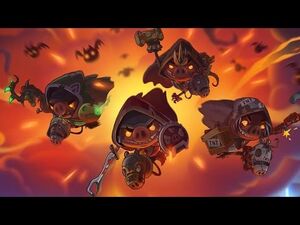 Apocalyptic Hog Riders
Add a photo to this gallery

Retrieved from "https://villains.fandom.com/wiki/Green_Pigs?oldid=3292699"
Community content is available under CC-BY-SA unless otherwise noted.