The Green Tide
The Orcish Horde

Near endless armies of orkoid humanoids and monsters

Monstrous barbarians
The Greenskins are one of the more prominent villainous factions in the tabletop wargame Warhammer Fantasy Battles and its related media. Greenskins is the collective term for Orcs and Goblins when they band together for a WAAAAGH campaign. These brutish and unruly barbarians love nothing more than a good fight and from time to time they will form a great WAAAGH!, an organized mass invasion of civilized lands. Greenskin armies feature masses of undisciplined orcs and goblins, as well as cavalry composed primarily of boar, wolf and wyvern riders, and monstrous units like trolls and giant spiders.

Their Warhammer 40,000 counterpart is the Orks.

Orcs and Goblins are the most stubborn enemies of the Old World. Collectively known as Greenskins, they are an aggressive and brutal race with an unquenchable love of fighting. For most nations, war is a means to an end, an act of aggression to conquer and dominate an enemy. However, the Greenskins, and the Orcs in particular, revel in battle purely for the sake of it. Orcs are built for violence, brutal, bullying creatures of jutting jaws and hulking appearance. The Goblins, by contrast, are smaller but more cunning as they mob up in greater numbers. This motley cast is supported by a fell menagerie of other creatures from wolves to Trolls, monstrous spiders to lumbering and dimwitted Giants.

Yet it’s the Orcs that dominate this faction, their violent temperament keeping them top of the Greenskin tree. Orc attacks range from raids to mighty Waaaghs where Greenskins of all stripes congregate in their tens of thousands under a single leader, who they believe has been chosen by Gork and Mork the fickle gods of orcish society, to lead the mighty green tide on a rampage across the world. It is the Waaagh that the other, weaker, races fear the most, as once an Orc Warboss gains enough momentum his horde can only ever be stopped at great cost. The Empire is a common target having been ravaged countless times by infamous Waaaghs throughout history. Yet it is the Dwarfs that harbour a special hatred of Orcs and their despicable kin, as they have lost many of their legendary strongholds to Greenskin incursions.

While the Greenskins have made lairs in ransacked Dwarfen holds, they can be found across the world, the majority residing in the arid Badlands, mainly fighting amongst themselves and occasionally coming together as a greater threat. 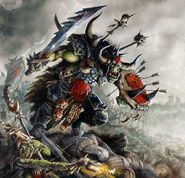 A warband of Night Goblins.

A group of greenskin trolls.

Orc Boar Boy.
Add a photo to this gallery

Retrieved from "https://villains.fandom.com/wiki/Greenskins?oldid=3918030"
Community content is available under CC-BY-SA unless otherwise noted.