Greeza (グリーザ Gurīza) is the main antagonist of Ultraman X. He is a monsters born from the distortions of space.

Fifteen years ago, after destroying three planets, Greeza wanted to destroy the solar system. As he darted into the Milky Way, he encountered resistance in the form of Ultraman X. All for One Good Ultra and the figures clashed with each other in the form of their travel fields until they reached the sun, where X took this opportunity to throw the villain inside. That. However, this has been its greatest devastation, as the villain's death has inflicted Ultra Flare, with the wave trapping X in the form of computer data and dumping it on Earth.

Greeza actually survived the supposed destruction, revived from a wave of Ultra Flares and launched Dark Thunder Energy on Earth to turn the monsters rampage and has been at it for at least eighteen days, starting around Mercury, and then moving past Venus to reach Earth, according to Headquarters. UNVER in Geneva. His activities were notified by aliens hiding on Earth, so much so that Dada predicted that Earth would face extinction from the attack. Even worse, lightning was also taken advantage of by the evil faction during its debut, until they were defeated.

Sometime after the Bugbuzun group's disturbance to Earth, Mamoru and Wataru saw Greeza in his first form as they flew past the moon and that contact caused Space Musketty to lose contact with headquarters. Greeza finally landed on Earth and completely wiped out the UNVER base in Nevada and absorbed all the Spark Dolls there because he felt that place was the biggest source of Spark Dolls in the world and the Earth monsters were the most abundant life energy. Greeza then transforms into his second form and flies straight to the second largest source, which happens to be Xio's headquarters in Japan.

On his way to Japan, he encountered opposition from Xio USA in North Pacific airspace and they launched Perseus missiles at Greeza, but he avoided them all and crushed the resistance. Then enlarged Xio's base when Daichi transformed into Ultraman X and he transformed into his Exceed X form immediately to stop him. After a quick tussle, X joins Hayato in Sky Musketty and Cyber ​​Gomora to stop Greeza, but the aliens have the upper hand due to the distortion, shield, and powerful attacks. Eventually he drops Sky Musketty with its rays, and notices Cyber ​​Gomora with its vortex, which also disrupts the electricity in the surrounding area too. X tries to use the Exceed X Slash on Greeza, but it absorbs it. Unfortunately for Greeza, this led to the mistake of allegedly being killed when X detonated him from the inside. Beautiful Ending

Soon after, Greeza regenerated and relaunched his attack on Xio's base and was met with resistance by Cyber ​​Gomorrah again. Greeza quickly took advantage of it and, at the same time, destroyed Xio's base with his energy attack. The aliens then absorbed all the Spark Dolls on the base, even the recently revived EX Red King, Tsurugi Demaaga, and EX Gomora, until they took their final form. Then, Greeza continued his tantrum on Earth despite Xio's obstacles. Before he could finish him off, Wataru and Mamoru returned to Space Musketty and destroyed the energy ball meant for Xio.

Before long, Daichi and X reunite and once again get in the way of Greeza. Even in his Exceed X form, Ultraman could not keep up with Greeza and his newfound powers obtained from Spark Dolls, including Super Oscillatory Wave Gomora and Flame Road EX Red King. But then Daichi reached out to Gomora and hit Greeza in the chest. This resulted in all of the Spark Dolls he absorbed coming to X and he merged with him to form Hybrid Armor. Greeza was finally defeated once and for all with Ultimate Xanadium, which was supported by all Cyber ​​Cards and Spark Dolls.

On the evening after Z defeated Bullton, a strange dimensional gap appeared in the sky, marking Greeza's arrival. The Four-Dimensional Capriccio The day after the fight against Bullton, Greeza had devoured eleven disaster exile workers, making it seem as if they vanished into midair. Riku Asakura contacted Haruki Natsukawa when he detected a hollow vibration on Haruki's Earth, saying that Bullton's destruction caused a hole to form in the universe as it was no longer around to endure the "irrationality" to sustain the universe. Just then, Greeza fully materialized and began to attack the city. Z and Geed transform to fight empty monsters, and later merge with Jugglus Juggler, transforming into Tri-King and later Five King. Still, their efforts weren't enough to bring Greeza down. Geed decides to sacrifice himself by joining forces with Greeza to trap him between reality and unreal, sealing him in his first form. He had told Z that the "needle" was beyond the void, and gave the Z Ultra Medal to use later.

That night, Greeza is almost completely integrated with Geed and becomes active again. Fortunately, after obtaining the Belial Medal from Celebro, Z transforms into his new Delta Rise Claw form, which has the power to withstand being absorbed by Greeza. Z manages to free Geed from the void and pulls out Beliarok, the proverbial "needle" needed to sew a hole in space and destroy Greeza. After a brief battle, Z and Haruki managed to convince Beliarok to fight with them and finish off Greeza with a Deathcium Slash. 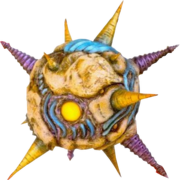 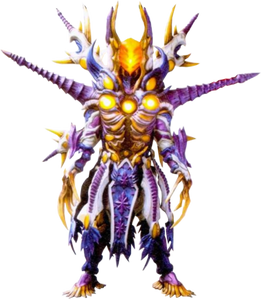